Prophet Shepherd Bushi and his wife, Mary have been released on bail R100 000 bail.

The Bushiri’s applied for bail at the Pretoria Specialised Commercial Crimes Court, where his followers sprayed ‘holy oil' on a cop's car while shouting "fire, fire, fire".

Bushiri and his wife were arrested in Rustenburg on Friday last week. 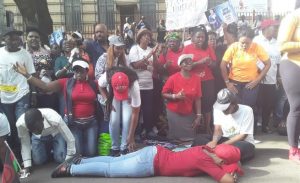