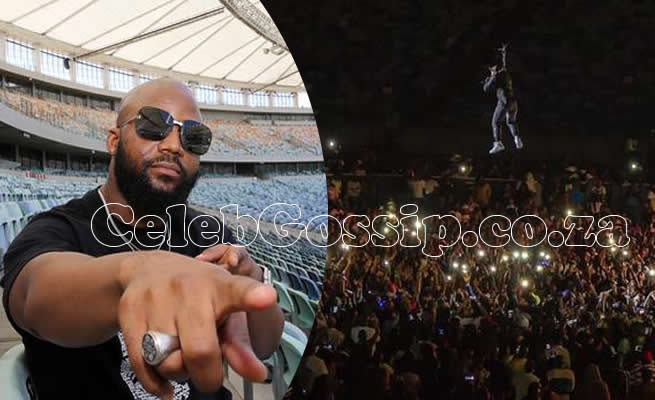 Multi-award winning South African artist and entrepreneur, Cassper Nyovest has filled up yet another Stadium.

After making history by filling up the Ticket Pro Dome, Orlando Stadium and the 68 000 capacity FNB Stadium, the star has now done the same with Moses Mabhida Stadium.

Scores of Tsibipians (Cassper’s Fans) showed up in their numbers on Saturday to witness the rapper further cement his spot in the history books.

Cassper’s #FillUp concert came from the common belief in the local music industry that Mzansi artists could not fill up stadiums without international acts, a notion the rapper has managed to prove wrong.

While the concert was a success, Cassper has revealed that he “lost millions due to the lack of sponsorship and broken promises.”

Nevertheless, the star continues to be an inspirations to his peers and a lot of young people in the townships who idolise him.

Durban, tonight was Legendary!!!! Thank you!!!! All of you who came out!!! Y’all are legends!!! Get home safe. Same time!!! Next year!!! #FillUpMosesMabhida ##FilledUpMosesMabhida 🎥 : @jabukiing

Durban, tonight was Legendary!!!! Thank you!!!! All of you who came out!!! Y’all are legends!!! Get home safe. Same time!!! Next year!!! #FillUpMosesMabhida ##FilledUpMosesMabhida pic.twitter.com/2DgJa5z2Cv

Bitter sweet morning. Knowing that we lost millions due 2 the lack of sponsorship&broken promises breaks my heart but knowing that 100 000s of ppl r inspired makes my life. Would I do it again? HELL YEAH!!! It’ll take me a while 2 make d money back but the feeling is PRICELESS!!!

I went through a lot for this show to happen but I have to say this. The way my People support me is unbelievable!!!! I don’t know why you guys love me so much but I feel the love very single time I need it most. Thank you so much #TeamNyovest . I pray God blesses your hearts. ❤️