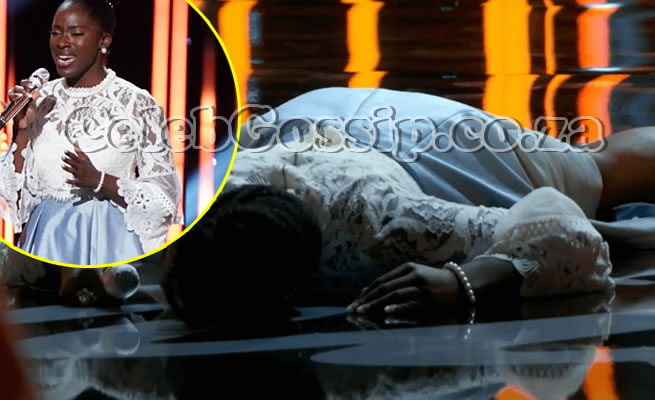 American Idol brought on the duets round on Monday, which resulted in quite a few big surprises. However, one moment that shocked everyone had nothing to do with the performance.

This week, contestants were divided into pairs, picked by the judges, to perform duets. Some worked well, and others struggled with mismatched and conflicting personalities.

However, for Ronda Felton and Funke Lagoke, their partnership in rehearsals was one of mutual respect and support. Lagoke helped Felton overcome some of her insecurities and belt out a beautiful performance of "Tell Him," originally written and recorded by Barbra Streisand and Celine Dion.

After the performance, the judges huddled together as Lagoke and Felton stood on stage, awaiting news of whether or not they would be moving on or going home.

Katy Perry admitted that she felt Lagoke "wasn't perfect," while Luke Bryan said the songstress had grown on her and he wanted to see more of what she could do. This left Lagoke's fate in Lionel Richie's hands.

As Richie gave feedback — which included some criticism for both singers — Lagoke appeared to sway a bit before reaching her hand to her face, and as Richie spoke the songstress completely fainted, falling hard, face first onto the stage.

The judges and Felton rushed to her aid, and medics were called in as she remained unresponsive, while Perry looked on in fear, trying not to crowd the stage.

Bryan explained to the medics that Lagoke had "busted her chin" in the fall and later the EMTs placed white gauze cloth over her chin as they lifted her onto a stretcher. She regained consciousness as she was wheeled out of the theater and into an ambulance.

A title card explained that she "was treated for dehydration and released from the hospital."

The only upside for the songstress — and her duet partner — was that Richie has decided to move both of them on to the next round of competition, the Showstopper Round, meaning their Idol journey's hadn't yet come to an end.

"It's absolutely amazing news. I can't say that I'm happy in this moment, I'm worried about her health more than anything," Felton shared. "That's the number one important thing right now. I just want her to know that I love her, I care about her, and I just want her to be OK."

Fans watching couldn't believe the shocking incident, and took to Twitter to share their surprise at the frightening incident.

Holy HELL!!! They way Funke hit the floor on #AmericanIdol … that legit scared me. I really hope she is okay.

Girl passed out on american idol and busted her chin.
Hope she is alright!

Who thought Lionel was fitna send them home before she fainted? #AmericanIdol pic.twitter.com/tq0a0fmWLh

The 16-year-old TikTok star tried her best with a duet of Harry Styles' "Sign of the Times," but couldn't quite live up to the high bar set by her duet partner, Hannah Everhart, who ended up moving on to the next round. See the video below for more on Conway's time on the show.