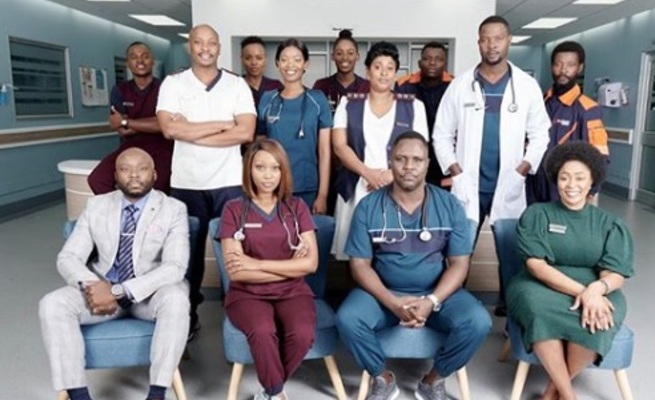 Actress Nomphilo Maphumulo has once again hogged the limelight with her impressive acting skills after a debut appearance at the new eTV show, Durban Gen. The star actress from Uzalo who plays Nosipho on the daily hit soapie left many shocked when she appeared on the medical drama series titled Durban Gen while stuck to her nephew. Nomphilo plays Zodwa on Durban Gen, her scene had people glued to their TV screens and wanting more of the show.

The drama series has all the ingredients to be a hit and a fan favorite. Stained Glass Managing Director Pepsi Pokane expressed his excitement about the first medical drama to be shot in Durban,

“It is an honour to be warmly welcomed into the eFamily. The entire team, production, cast, and crew are incredibly excited to be working on the first-ever medical drama that will be set in KwaZulu Natal. Durban Gen is a big win for Stained Glass TV, for KZN Province and for the City of eThekwini. We believe that the audiences will connect with the show’s storylines, exciting characters, and an incredible cast.

Lihle Dhlomo is taking on the character of Dr. Precious Dlamini, an obstetrician-gynecologist married to Head of Surgery and womanizer Dr.Thabo Dlamini, played by Meshack Mavuso.

The story of Durban Gen is set in the heart of Newlands East, a township in Durban, where the most prominent and recognizable academic public hospital, Durban General, is found.

The story follows the life of the main protagonist, Mbali Mthethwa, a newly qualified doctor who moves to the big city, away from her fiancé and the small town they grew up in, to serve her final year of community service at Durban General Hospital.

However, she finds herself torn between two men. Her fiancé Sibusiso Dlamini, the one she has promised herself to, and her superior, Dr. Lindelani Zulu, a brilliant, attractive surgeon with whom she has undeniable chemistry.