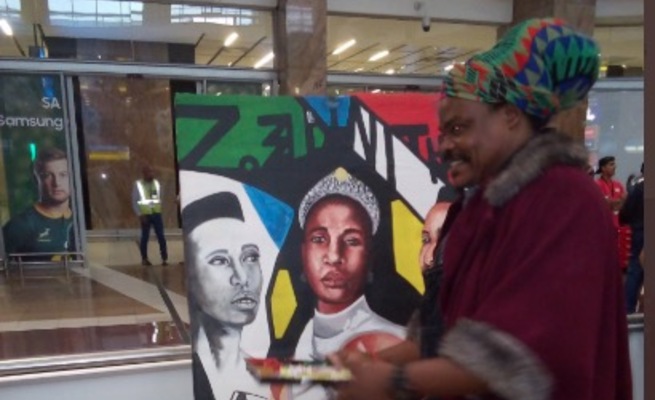 Infamous funeral artist Lebani Sirenje, aka Rasta, got tongues wagging with a painting of Miss Universe, Zozibini Tunzi at her official homecoming at OR Tambo International airport on Saturday morning.

As hundreds of fans braved the wet weather to welcome Zozi home for the first time since she scooped the coveted crown in December 2019, Rasta caused a storm on the Twitter streets.

Excitement filled the air as fans dressed in SA colours waved the national flag and celebrated the momentous occasion with song and dance.

As the crowd of excited fans waited in anticipation for Zozi to touch down, Rasta got to work with his portrait of the nation's queen.

Rasta said he started the painting of Zozi yesterday and hopes to hand it over to her, as it's his way of paying tribute.

However, over on the Twitter streets Rasta came under fire once again as he failed to impress.

No one:
Absolutely no one:
Rasta paint Malema instead of @zozitunzi pic.twitter.com/8VWp88Pys1

Rasta Rasta Rasta you are so Rude ,How could you disrespect our QUEEN like this.please leave#ZoziComeshome#rasta pic.twitter.com/RWUEW2fHRa

Rasta this is not our Zozi 😏This is WHOOPI GOLDBERG #ZoziComeshome pic.twitter.com/AVi5oLkSYR

#ZoziComeshome and sees this painting of Rasta, she might gets back on the plane and never comes back 🙆🏾‍♂️🙆🏾‍♂️🙆🏾‍♂️😂😂🤷🏾‍♂️🤷🏾‍♂️#SouthAfrica please help 🙆🏾‍♂️🙆🏾‍♂️ pic.twitter.com/3qBbhLSezN