Home Celeb Gossip Mshoza's 2 failed marriages and 8 children between them: Mother-in-law kicked out... 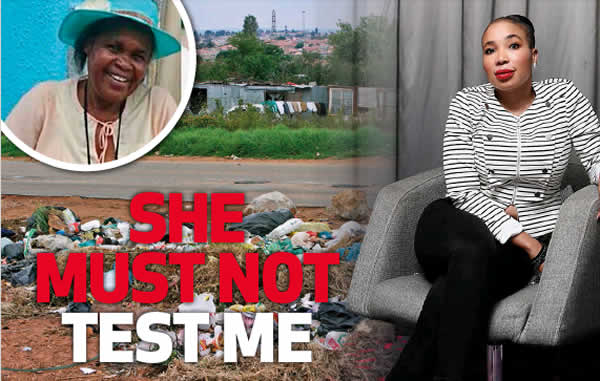 WITH two failed marriages and eight children between them, they'd hoped to find their happily ever after with each other.

It's been five months since Nomasonto “Mshoza” Maswanganyi (35) said “I do” to her “Baba”, Thuthukani Mvula (40) – but now the singer is raging with anger because of what her husband's relatives are saying about her.

She's tired of trying to please her new family, especially her mother-in-law, Lindiwe “MaKhoza” Mvula, who lived in a separate house on the couple's sprawling plot in Bergville, KwaZulu-Natal.

MaKhoza (63) is reportedly so fed up with her daughter-in-law's extravagant lifestyle and untraditional ways she left the three-bedroom home Thuthu and his estranged wife, Duduzile Mvula, built for her. The pensioner is living in a crime-ridden informal settlement in Johannesburg's Snake Park, relatives say – and they're placing the blame squarely on Mshoza.

The Abantu Bam singer is having none of it though. The problems in the relationship are nothing more than the usual mother-in-law/makoti problems, she insists.

“Mothers-in-law and daughters-in-law often don't get along – it's a universal thing. But she and I have never argued or exchanged words.”

Mshoza, who confirms recent reports about her being pregnant are false, concedes she and MaKhoza don't always see eye to eye. But she denies chasing MaKhoza away. She would never allow her husband's mother to be homeless or live in a shack, she says.

“I respect the old lady. She gave birth to the man of my dreams.”

So what exactly is going on behind closed doors in the Mvula household? Has MaKhoza been kicked out of the spacious house her son took seven years to build? We went looking for MaKhoza in Snake Park township in Soweto in search of answers.

WE'RE hit by a foul stench. The squatter camp, a haven for petty crime, has no electricity or sanitation and reeks of sewage water. We can't find MaKhoza anywhere, so we call her. Has she been kicked out of her home? She'd never leave her home for anyone, she tells DRUM. “Have you seen how beautiful my house is? My son built that house for me.”

She came to Johannesburg in January to fix her Sassa card, she says. “I also came to Joburg to relax and get away from stress.”

MaKhoza is taking her time before returning home. “I'm a very soft-spoken person, I like smiling and laughing and uMakoti (Mshoza) talks too much.”

That's the reason she and her new daughter-in-law don't spend hours together.

She left home for some peace and quiet, she says, the pitch of her voice increasing the more she speaks about Mshoza. It's clear the relationship between her and her son's wife isn't ideal.

“Can you believe what that thing told my daughter? She told her to get a job because she's too old [at 25] to be unemployed. My daughter has no qualification and no work experience, how is she supposed to get a job emakhaya (in the rural area)? There's no work there.”

MaKhoza is living off her pension while she's in Joburg and will go back home “when I'm good and ready”.

“I can live in the bush as long as it's peaceful. I don't know if I'll find peace when I go back.”

She does want to have peace and quiet though. But she also needs time to figure out how to best heal her fractured relationship with Mshoza.

“I don't want to hurt anyone,” MaKhoza says. “I know myself – I can be very cruel when given the chance. Makoti must not test me.”

She knows she can't choose her son's wife and can't tell Mshoza to leave because Thuthu loves her. But she's not asking for much – all she wants is respect, MaKhoza says.

“I taught her everything about our culture, I showed her respect. She's playing with me and I don't like that.”

Mshoza's marital woes started in December when Thuthu paid lobola. But less than a month into her marriage and moving into their home, there was trouble in paradise.

A relative from the Mvula family, who asked not the named, says MaKhoza “never liked Mshoza because she thinks all she wants to do is spend Thuthukani's money”.

The controversial singer's lavish lifestyle and disrespect for their Zulu culture were also bones of contention for the family matriarch.

But Mshoza says she's always maintained she's not a typical rural wife who would fetch water from the river wearing long skirts and a headscarf all day.

“I'm an artist. I grew up in Soweto. I wear wigs and weaves, I have long nails and my husband loves me the way I am. I try to compromise with my inlaws and respect our culture as much as possible but that's still an issue with her [MaKhoza].

“I try to please her, but I don't know what to do anymore.”

She laughs off the family's claims she's using Thuthu for his money. “Ngiyi cheese girl, ngikhule ngo shiz (I'm a modern girl and I grew up eating cheese). I like to buy nice things for myself and my husband, but I also make my own money through my mining company and music.

“I passed the phase of being a gold-digger many years ago.”

But there are those close to Thuthu who feel Mshoza isn't being truthful.

Despite MaKhoza confirming she wasn't kicked out, Thuthu's cousin, Mpume Mvula, says she can believe “Thuthu and Mshoza told uMa to leave”.

Mpume claims the couple kicked her out of their house in December last year.

After arriving home from her job as a sales assistant at a local store, Mpume found her clothes scattered in the yard.

“Thuthu and Mshoza threw my clothes out in plastic bags,” she claims. “They said I'm the one feeding Thuthukani's ex-wife, Dudu, information about their relationship and it's not true.”

Mpume says jealousy may also be the reason MaKhoza left home. On the day MaKhoza was allegedly told to leave, Thuthu's ex-girlfriend and the mother of two of his children, Hlengiwe, had come to their house to fetch her kids.

“Hlengiwe was laughing with uMa in the yard. She spent about two hours talking to her and it looked bad because Mshoza was in the house.”

“Mshoza is cruel. Her children are living a nice life with their stepfather while

‘I showed her respect. She's playing with me and I don't like that'

her own mother-in-law lives in a shack in Johannesburg. Thuthu is weak, he'll always take Mshoza's side – even against his own mother.”

A furious Mpume says she doesn't care about renting a backroom in a nearby township after she was kicked out. The one she feels sorry for is Thuthu's mother.

“She's old and can't be living in a shack. Thuthukani has no shame, even his bank cards are with Mshoza. uMa left the house crying.”

Mshoza rubbishes Mpume's claims that they threw her clothes out into the yard. But it's true they asked her to leave, she says. They believed she was feeding information to Dudu and the media and “couldn't be trusted”.

As for being jealous about Hlengiwe? “I wasn't jealous but I found it disrespectful,” Mshoza says.

“It wasn't a big deal and I didn't cause a scene. I'm not worried because Thuthu loves me.”

IT'S not just Thuthu's mother who has a tense relat ions h ip with Mshoza. The businessman's s i s t er Simphiwe Mvula, who has al so moved to Snake Park, says Mshoza is the rudest person she's

met. “She asked why I'm 25 years old and unemployed, am I planning to sponge off my brother until he dies? Uluhlaza (she is rude) and I won't go back there until she leaves that house.”

But Mshoza says she was only trying to motivate her sister-inlaw with those questions.

“I didn't mean it in a bad way. I offered to help pay for her to go to school so she can be independent.

“She can't even write and I wanted her to not depend on her brother and be able to have her own money and maybe even work in the family business,” adds Mshoza, who works in the human resources department of her husband's engineering company.

Thuthu's estranged wife isn't impressed with the state of affairs. She's disappointed in him, she says.

“I got a call from the family telling me Mshoza and Thuthu had kicked uMa out of the house I had built for her with my own hands. That house was a gift to her.

“Usually, mothers-in-law don't live in the same house as their married children but we wanted her to be next to us in case she gets ill,” Dudu says.

And what does Thuthu have to say about the drama surrounding his family?

He hasn't kicked his mother out, he insists.

“How can I kick my own mother out of the house I built for her? She knows she's welcome to come back anytime.”

His mother isn't homeless, he maintains. “uMa owns a stand in Johannesburg that she's yet to build a house on. She has a little shack her friend stays in on the stand and that's where she prefers to be when she's in Johannesburg.”

He also shrugs off Simphiwe and Mpume's claims as unimportant. “Those two are just relatives. I care only about my mother, my wife and my children. Anyone else can mind their own business.”

Thuthu isn't aware of any conflict between his mother and his wife. “I spoke to my mother yesterday. She's okay and she'll return when she's ready.”

He also reiterated his love for the woman he wed a few months ago. He and Mshoza are madly in love, Thuthu says, and he's standing by her no matter what. And nobody will come in the way of their love – not even his mother.

‘It wasn't a big deal. I'm not worried because Thuthu loves me'