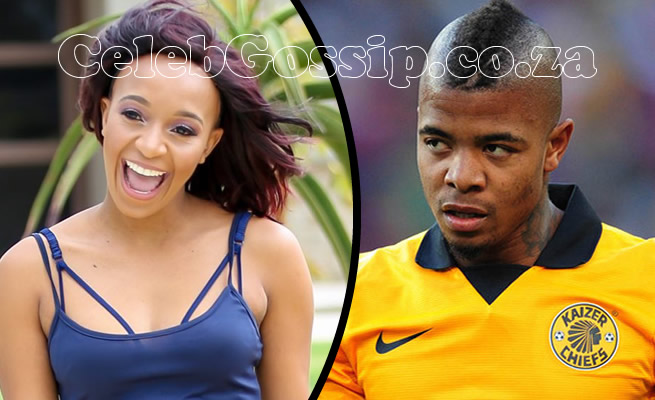 SIDELINED Mamelodi Sundowns winger George Lebese is rumoured to be caught in a love triangle. And insiders claim the footie has substituted long-time girlfriend Thato Mokoena for “fresh” Sizakele Manoga.

This shuffle has left Thato depressed, according to sources. An informant claimed Thato had noticed that George’s behaviour toward her had changed. But she thought it had something to do with his club issues, the mole said.

Insisted the informant: “Thato was forced to go back home as things weren’t alright. But she later discovered that George had again ditched her for a rich girl.”

The mole said Thato then started suffering from depression. “What made things worse was that George took Sizakele on a baecation in Bali and bought her expensive items. But he’s never taken her [Thato] anywhere, except the streets of Braamfontein and Rosebank, Jozi, which is sad.”

Claimed another source: “I think Thato didn’t take it well, as George kept on posting with Sizakele on social media. This led to Thato’s depression. Thato was controlled by George and believed everything she was told by him, although she could see he was cheating on her.”

The third source said Thato had isolated herself. “We no longer see her anywhere. We’ve never seen her like this, she’s a fun and motivating person. That girl is capable of following George to the grave. For her sake, we hope she seeks help and recovers from this depression. George is going to regret this because Sizakele will leave him again,” the source said.

Sizakele was once George's girlfriend before she allegedly dumped him for a richer boyfriend, Jimmy Tau.

Jimmy and Sizakele’s timultuous relationship often made headlines; as did hers with then Kaizer Chiefsleft winger George Lebese. Interestingly, both George and Jimmy Tau were playing for Kaizer Chiefs.

Jimmy and Sizakele’s romance was in the spotlight in early 2015, with it generally said that he stole her from Lebese. Sizakele in 2015 opened a case of assault against George, after he physically assaulted her, allegedly in a jealous rage over another man.

Tau, the former Kaizer Chiefs and Orlando Pirates captain was later caught the wrong end of the stick on Twitter after Sizakele Manonga, broke up with him.

The retired footballer, who now works as a soccer commentator on Supersport, was alleged to have ended his relationship with Manonga after paying R200,000 lobola for her in July 2015.

Now it seems George had some unfinished business with his ex girlfriend hence he has decided to seek a 'replay' or rather 'second leg' of their love match.

When contacted on Wednesday, Thato said: “I thought I told you to stop harassing me. From now on, don’t ever call me about him, please.”

Both Sizakele and George could not be reached for comment and failed to respond to our SMSes and WhatsApp messages.