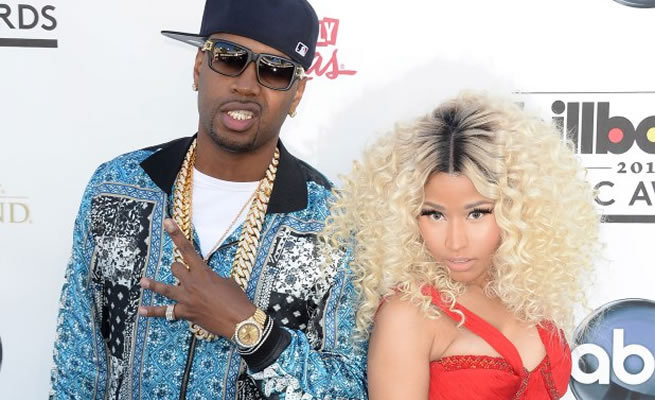 Who knew that having a huge 'anaconda' could make you millions of dollars?

American rapper and Nicki Minaj’s ex-boyfriend, Safaree Samuels is about to become filthy rich after his rather large manhood was leaked onto the internet earlier this year.

According to TMZ, “the anaconda Nicki Minaj was allegedly obsessed with – on and off for 12 years” has scored Safaree a sex toy endorsement deal worth millions of dollars.

The deal is with one of the top sex toy makers in the world, Doc Johnson.

The company is currently working on creating a life-size replica of Safaree’s penis, which shocked the whole world in February when a video of it was leaked online.

He was also offered to make “rubber Safaree meats” with fur around them.

“My female fans hit me up saying they would like that. There’s been some good coming with it, my bookings are through the roof,” he continued.

Although Safaree has already gone in to have a mold of his 'anaconda' taken, fans will have to wait until December for pre-orders to open.

The toys will make their way to their new owners just in time for Valentine’s Day 2019.

Safaree also shared the news on his social media pages while also throwing some shade at Nicki Minaj.

“I work hard so I can get the last laugh. When y'all think I'm losing I'm not. Trust me! To all the ppl who fronted on me & thought I'd fall off and disappear… Suck my sex toy. Thank you to the biggest adult toy company in the world @docjohnsonusa for the opportunity. To my fans and supporters who root for me, I love y'all !! Ladies I'm allll yours. Jokes on you. My anaconda don't want none if you ain't got buns hun STRAAAIIITTTTT,” he said.

I work hard so I can get the last laugh. When y'all think I'm losing I'm not. Trust me! To all the ppl who fronted on me & thought I'd fall off and dissapear… Suck my sex toy 😇 thank you to the biggest adult toy company in the world @docjohnsonusa for the opportunity and my team @britmo_inc & @therealkdmcnair for making this happen and to my fans and supporters who root for me, I love y'all !! Ladies I'm allll yours 😇😇😛😛 Jokes on you 🏂🏄🏾⛷ its a big deal 🍆🍆 😂😂 but who's gonna copp 1 on the low?? 🤔 My anaconda don't want none if you ain't got buns hun 😛 STRAAAIIITTTTT #THEBAGTALKJUSTGOTREALDIFFERENT #safaree #STUNTGANG #TEAMSAFAREE #myhatersshouldlogout #thankyougod