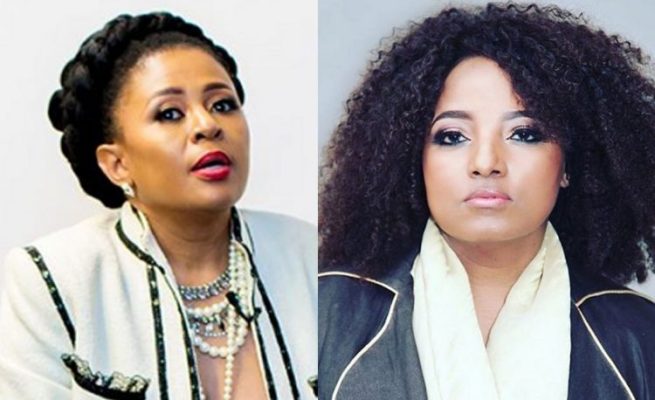 According to court papers, she took Ronnie on for allegedly posting about her hubby, Romeo Kumalo, and her in a WhatsApp group called Open Politics (OP). In the documents, Bassie argues she nearly had a heart attack.

This was when Ronnie contacted her in a separate WhatsApp chat to inform her that he was in possession of the alleged video that was a hot topic on social media. And when she requested it, Ronnie failed to send Bassie the controversial video.

He instead sent her posts from the OP WhatsApp group mentioning the alleged video. According to Bassie, Ronnie is equally responsible for the lies – doing the rounds about Romeo and her – that were discussed in the OP group by members. This because he is the OP’s administrator.

Bassie and Romeo were members of the WhatsApp group when other members were sharing and chatting about the allegations Jackie had posted. But in his responding affidavit, Ronnie insisted he wasn’t the sole administrator of the OP WhatsApp group.

Read the document, in part: “In my unpretentious view, I regard the applicant as a friend. This will be demonstrated by the fact that we have, on few occasions, called one another and communicated outside the group. And, at some stage, I offered her advice on the 7th January 2018.”

Ronnie said the purpose of the OP WhatsApp group was to discuss current politics or issues candidly, when he formed it. He argued the posts on 5 June weren’t mentioned by Bassie in her statement, and that they were made by other members just prior to the events that are mentioned.

“These omissions have also caused the applicant to place my posts out of context and also be selective in what she submits as evidence,” Ronnie’s court document, read in part.

He also denied the allegations levelled against him. In his affidavit, Ronnie implicates Criselda, the SunTeam understands to be TV and radio personality, Criselda Dudumashe.

But Bassie hasn’t taken legal action against her. According Ronnie, the tweets by Jackie Phamotse were initially posted by Criselda in the group. He denied causing any emotional stress to Bassie and her family.

A source close to the situation says Bassie is going guns blazing on everyone who posted in the group what Jackie wrote on Twitter. When contacted for comment, Bassie said she was still consulting with her legal team on whether to take legal action against Criselda. Ronnie could not be reached for comment.

Said Criselda: “I won’t dignify this with an answer. I was simply asking men to protect their families. It’s a private group where we talk about topical issues, and ministers and CEOs have been called to account in that group. I’m disappointed. I regard Basetsana as my sister. The screen grab I sent was after I privately spoke to Bassie, sending her a sisterly message and she responded. The one I posted had no defamatory nature, I was asking men to protect the institute of marriage. Even talking about this in media, for me, is wrong. I’ll wait for the papers and respond accordingly.”