Home Celeb Gossip I met my wife in a lift at a flat in Hillbrow:... 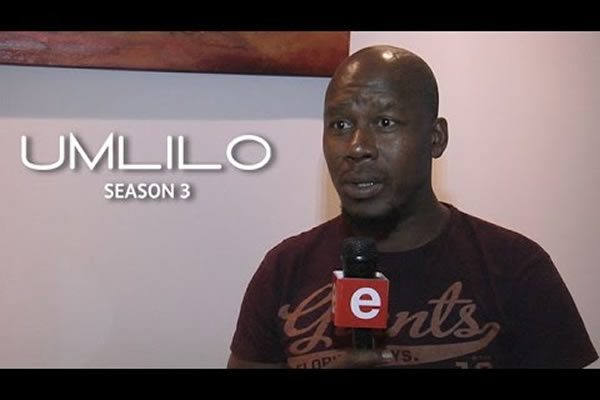 As a teenager he knew he’d never be the doctor his father hoped he’d be. His maths marks simply weren’t good enough to be accepted to study medicine so he turned his attention to acting – a passion his parents were initially sceptical of.

But just look at him now. Hamilton Dlamini has forged himself a career as one of the finest bad guys in the Mzansi entertainment world – an out-and-out villain viewers love to loathe. And it’s reaping major rewards too.

Hamilton (48) recently went home with a Golden Horn for best actor in a soapie/telenovela at the Saftas for his role as ruthless property magnate Banzi “The Wolf of Braamfontein” Kunene in Mzansi Magic’s Isithembiso.

He knew he’d win, Hamilton says. He works hard to hone his craft and he deserved it. But Banzi isn’t his only role making waves. Hamilton stars in South Africa’s very own western, Five Fingers for Marseilles, which is currently in cinemas.

The film, in Sesotho with English subtitles, is being hailed as a major triumph. It has scored five stars on movie review site Rotten Tomatoes and was described by one reviewer as “almost too entertaining for its own good”.

Set in post-apartheid South Africa in the small town of Lady Grey in the Eastern Cape, it tells the story of an outlaw who returns home after years on the run in Johannesburg. The Five Fingers gang is made up of black childhood friends who rebel against the white oppressors who’ve been brutalising the community of Marseilles.

It may be a western but it has all the hallmarks of a uniquely South African story: the pain of the past, the residue of the previous regime and the corruption caused by ambition.

“He’s never known the good life,” Hamilton says. His character is a revolutionary who, for all his baddie tendencies, “says some things that are profound and beautiful”.

Hamilton is no stranger to poverty either. He grew up in gang-infested Sebokeng township in Gauteng, the son of a truck driver father and stay-at-home mom. Once he realised his dad’s dream of him becoming a doctor wouldn’t come to anything he signed up for acting classes with the late Ken Gampu in Joburg.

He paid for the classes himself with money he made selling peanuts, sweets and cigarettes on trains in the late 1980s and found himself “forever dodging the cops and warring gangs”. His experiences helped mould the actor he is today, Hamilton says – but he still makes a point of embedding himself in the darker side of life to bring authenticity to his roles.

Criminals, and how they think and behave have always fascinated him.

“Most real-life bad guys come from broken homes. When I research my villainous characters I look at all these broken people.”

He “gets a thrill” from taking minibus taxis and hanging out at places most celebrities won’t be seen at.

“I go to shebeens and places that are considered dangerous because that’s where I learn to build my characters.”

Hamilton says he found “a carbon copy” of Banzi in Eyadini Lounge in Umlazi, Durban.

“I studied the man’s voice, his gestures and the way he walked and incorporated all of that into my character. I think this is why he’s so well-loved and why I won my Safta.”

Real-life Hamilton is a far cry from the bad guy he plays on screen. He’s a devoted family man and loves nothing more than to spend time at home with his three kids – Ntokozo (22), a BCom student, Refilwe (19), a ballet dancer, and Kgosiame (15), an up-andcoming rapper – and their three dogs, Lulu, Black and Dog.

Hamilton and his wife of 23 years, nutritionist Martha, met in Hillbrow in the lift of the block of flats where they lived.

Martha was a university student and Hamilton had just moved out of his parents’ home to find work as an actor in Joburg. Wearing overalls, a bucket hat and sneakers, Hamilton greeted Martha but didn’t have the nerve to ask her out because he didn’t think he’d meet her classy standards.

“I just told her she was beautiful and that was that.” Two weeks later Hamilton – this time dressed in a snazzy suit – saw Martha while she was out shopping and decided to go for it. I’d come from a corporate performance and I looked good but when I asked her out she said she already had a boyfriend.”

A few weeks later the boyfriend was out of the picture and Hamilton went all out to woo her.

“I remember watching her cook pasta in my flat while listening to Youssou N’Dour and thinking, ‘She’ll one day be my wife.”

A year later Martha was pregnant with their first child and Hamilton paid lobola and took her home to meet his family. He credits his wife for keeping his feet firmly on the ground.

“My wife helped me avoid a lot of what actors go through – like alcoholism, drugs and adultery. “I have a stable home – I go out and have a drink, but I know I have a family who loves and supports me. My wife tolerated my struggles and even when I didn’t have a cent she supported me.”

He wants his children to grow up knowing he’ll be there for them every step of the way.

“My community, teachers and my parents didn’t support my dream until I was much older. I want my children to have the best childhood and I always want to support them.”

Hamilton also wants to instill values in talented youngsters who may feel hopeless about their chances of success.

“I teach writing, acting and directing classes to kids in different townships, which is all self-funded. I teach these kids never to allow the system to victimise them and I tell them they’re valued,” he says.

Hamilton is writing his memoir, which charts his journey to success. He doesn’t have a name for the book yet but he aims to launch it next year. On top of all this he’s also preparing for a tour of the United Kingdom and the USA with the cast of The Head and the Load, a play by William Kentridge, later this year. Not too shabby for a guy who got his start selling peanuts on trains.