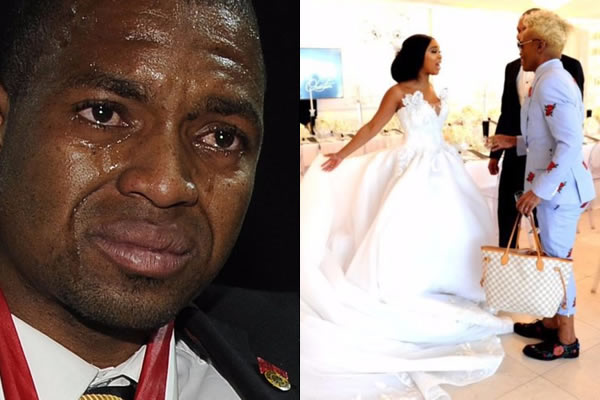 Since news of their relationship first broke, Itumeleng "Itu" Khune and Sphelele Makhunga became one of Mzansi's favourite couples.

The duo, who share an adorable little daughter together, are not shy about their love for each other on their respective social media accounts.

On Saturday, Sphelele decided to show off her "happy colour". In the photo, Mrs Khune rocked a black Nike crop top and matching leggings.

The jaw-dropping pic managed to get the attention of her hubby. Khune retweeted the image and captioned it: "A lot wifey," along with a rose and two heart emojis.

After Sphelele posted a beautiful snap of herself, Itu Khune showed her some love online.

Last year, the couple rekindled their relationship and shortly afterwards tied the knot in a beautiful traditional wedding.

Khune reportedly paid lobola in November 2019 and Sphelele posted pictures on Instagram, revealing that the goalie put a ring on it.

The couple have shown each other love online and Sphelele made Khune the happiest man alive when she welcomed a baby girl into the world in 2020.

The Kaizer Chiefs goalie also enjoys showing his little princess off on social media. Itu is definitely a super-proud dad and husband.

The proud dad posted the most adorable video of his little girl on his Instagram page.

In the clip, the Amakhosi player's baby is dressed in a cute grey outfit and pink booties. She can be seen joyfully waving her tiny legs about.

Khune wrote, "Life (has) a totally new meaning for me (after) having a daughter. You are the best thing that ever happened to me, my princess Zee."

Khune mentioned that Zee, who's also known as Amo, was set to turn six months old this past Friday.