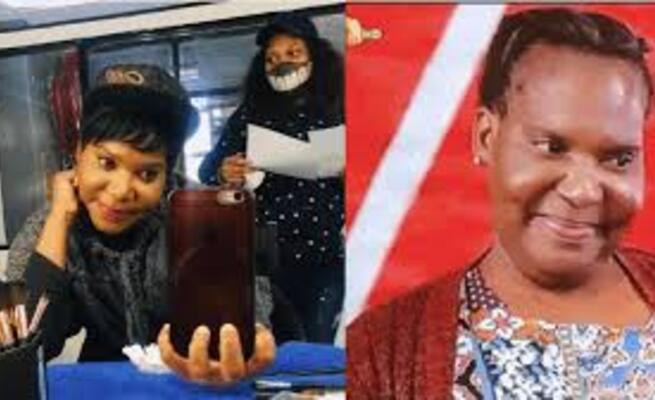 SHE’S the woman everyone loves to hate – Zodwa, the alcoholic mom of the darling Teddy in Gomora.

She leaves destruction wherever she goes and is known for her quirky one-liners that embarrass her son but make Mzansi laugh.

Zodwa’s lifestyle choices have made her lose her son after he was taken out of her care and put into a healthier environment with Melusi (Zolisa Xaluva) and Gladys (Thembi Seete). This left Zodwa free to drown her sorrows in booze. And because of that, she’s had a few brushes with violence.

Like her onscreen character, Sannah has had a few demons to fight in her own life and she understands some of Zodwa’s struggles.

“I know what it’s like to want to change but be stuck in a situation. Zodwa is being controlled by alcohol,” Sannah says.

Teddy always tries to rescue his mother but Zodwa constantly fails. “I haven’t battled with alcohol, but like Zodwa my children have been my pillar of strength, so I understand.”

For most of her life, Sannah lived in an abusive relationship with the father of her seven kids. And she uses her experience to play Zodwa.

She sometimes gets into trouble at work for improvising her lines. “I have a script like everyone else, but then I add gestures and slang to really make Zodwa come to life,” Sannah says.

“That woman lives is inside of me. I can feel it in my soul when I must add a bit of spice to my lines.” It all comes naturally to her. “Some of the things that happen once I get into character amaze me.”

Often the cast and crew break into laughter when Zodwa pulls some of her unexpected stunts on sets. “Everyone on set laughs at Zodwa’s antics. We all know of a Zodwa in the township.”

Sannah is grateful she’s allowed to add some creativity to the script. “You know, sometimes directors and writers get offended when you add to the script. But when you feel the character as much as I feel Zodwa, sometimes you end up adding things to enhance the role. And I’m grateful to be allowed the opportunity to do so at times.”

Sannah loves how Zodwa will fight to be a mother despite her flaws. “She loves her son unconditionally.”

Sannah says Zodwa reminds her of her own love for her children.

“I don’t live with my kids, they live with their father in Florida and I live in Soweto. Being away from them and having to arrange visits help me relate to what Zodwa feels when she’s away from her child,” she adds.

Eight years ago, Sannah and her taxi-owner husband separated due to verbal and physical abuse. And she was forced to leave her children behind and move back home to Soweto with her younger sister, Ntombizodwa Kobese (44), at her family home. “I had to go back home to Sgodiphola in Soweto. I had nothing to offer my children. He had the money and all I knew was to give birth and stay home,” she says.

“I had no Grade 12, no schooling, no work experience. All I did was mother my children and be a good wife.

“When the relationship became too abusive, my children advised me to leave and go back home. That was the best decision of my life,” she says.

Her husband lived with their children – Thokoza (31), a taxi-business owner; Simphiwe (28), a banker at Capitec; Sbusiso (26), a chartered accountant; Busisiwe (25), an economist; Themba (19), a rugby player; and 13-year-old twins Ayanonga and Abongile – and they would visit her in Soweto.

“I left with nothing but a nightgown and underwear on. And he thought I would go back because I missed the money. But I did not miss the punches and kicks,” she says.

“Sometimes you need to walk away from situations that do not serve you and learn to start over again. Look at me now – telling amazing stories and making the country laugh.”

Moving back to Soweto, things were tough. “I was shamed for coming back home and leaving my rich husband. People would gossip about me in the neighbourhood and I was called a ‘return soldier’.

But Sannah didn’t give up. She decided to be an actress and attended every audition she was called to. But she got very few roles.

“I felt like my time was almost up and I was getting old. But I still tried my best,” she says.

In 2016 she landed the role of Nomarashiya in Muvhango, but that was only for three months. Then she got a few small roles in eKasi: Our Stories.

“We shot eKasi for three or four days. You got your money and went back to queuing up for auditions. But I was good at saving up and I managed to extend my late parents’ home,” she says.

“I built some backrooms at home, fixed the house and built a shower.

Things I would have never done had I stayed in that abusive marriage,” she says. “Even my neighbours seemed proud and said my parents must be rejoicing in their graves.”

This went on until she auditioned for the role of Zodwa. “I was eyeing another character in Gomora, But I ended up getting called to appear a few times as Zodwa and I nailed it,” she says.

“I wasn’t happy that it was a small role for a short time, but I gave it my all and the directors were impressed.

“This role really changed my life completely. I’m loved and appreciated everywhere I go and that helped to boost my confidence. I’m a hero now in the township,” she says.

She used to be shamed for leaving an abusive marriage. “But now I can take care of my kids and my family and still be a respected actress,” she says.

Most importantly for Sannah, her kids are proud of her newfound independence. “They have supported me through everything. They’ve seen me at my worst and they also get to see me at my best.”

It’s a kind of miracle because just five years ago, Sannah knew nothing about acting. “I was just a baby-making machine. I didn’t know what a script was and how to take direction.”

But with the help of friends like singer Winnie Khumalo, she learnt the ropes quickly.

“I will forever be grateful to Winnie for taking me with her to auditions and allowing me to try my luck. Who would have thought that acting would be my passion? That I would call myself an actress. All I did was live my life for my husband. Ja neh, we live and learn.”