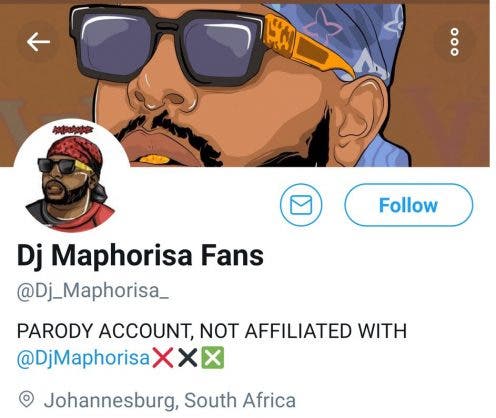 SAMA-nominated DJ Maphorisa is having a rather eventful week.

An unsuspecting fan going by the name of Zinhle made contact with a fake Maphorisa account, exchanged telephone numbers and established an interesting rapport. The account clearly states in caps ‘PARODY ACCOUNT, NOT AFFILIATED WITH @DjMaphorisa’.

The owner of the fake account, whom she saved on her contacts as ‘Phori’, later asked her for nudes, to which Zinhle willingly and admittedly obliged.

Zinhle first posted that the DJ, whom she loves and respects, has shown her who he is and used his celebrity power over her by asking her for her naked pictures. At that time of posting, she seemed to be unaware that she had been speaking to an imposter and not the real Maphorisa.

It appears he’d refused to show her his face in previous messages but has a picture of the popular amapiano DJ as his display picture.

The lady who though he was sending Dj Maphorisa nudes meanwhile she was sending them to a catfish.She's really in love with Phori and is hurt big time..

She went on to mention that he promised to date her and take care of her because of her love for him. Zinhle admitted that she sent the nudes, which were later leaked by the fake account and are currently circulating on social media.

She said the fake Phori wanted to send a driver to fetch her to engage in a sexual liaison and when she declined, he asked to see her naked body and face.

After fans made her aware that the account was bogus, the disappointed Zinhle posted the WhatsApp exchange between her and her false Phori. She wrote in isiZulu saying that God should bless DJ Maphorisa and his fans and no one should judge her without knowing what happened

I am sure she sent her nudes to a fake Phori pic.twitter.com/EjPIpbnpb1

When the nudes were leaked, Zinhle asked the fake account why he had done this and his response was that she was a “liker of things” (Indaba uyaphapha).

She went on to say that he’s insulted her but scolded herself saying this was what she got for obsessing over him. Zinhle went on to write that at times it was wise to think twice before giving out your phone number, threatening that she would deal with the account and had gotten advice on how to proceed, hinting that the result may benefit her financially.

The fake account was on trending social media accounts weeks before for offering R3,000 for likes and retweets. DJ Maphorisa has previously asked his followers to assist in reporting the fake account.