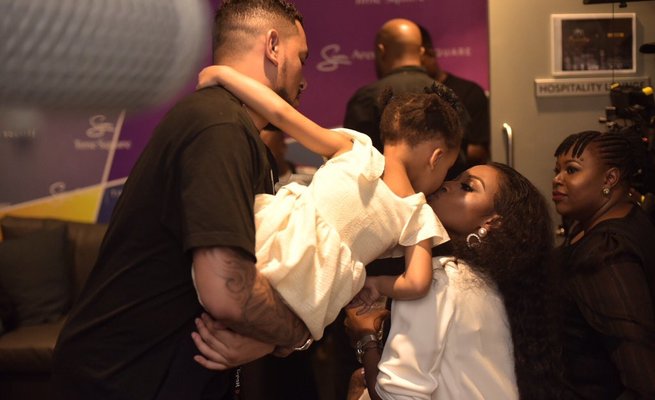 Even though they are no longer a couple, DJ Zinhle and AKA are good at finding a balance in co-parenting their daughter, Kairo Forbes.

The pair split in December, but have often shared moments they have with Kairo on their social media pages.

On Wednesday AKA shared an Instagram Story of his time with Kairo. Later that evening Zinhle shared some moments with their little one.

Though they are apart, it looks like Kairo's happiness come first.

Despite making headlines for the break-up, AKA has chosen to focus on raising his baby girl.

Speaking to Scoop Makhathini during his “Day in the life of Mega” interview on SlikourOnLife, AKA said, “I spend more time with my family. I suppose my daughter is going to start her career … I think she's gonna be a musician eventually.”

Weeks ago, AKA shared a precious moment of taking Kairo to school. In a series of videos shared on Kairo's Instagram Stories, AKA was seen walking his daughter into her classroom while she showed him around.

Zinhle has also described her daughter to be very independent, explaining that it came from her and AKA always being on the road.

“Kairo’s independence comes from me and Kiernan (AKA) always being on the road,” Zinhle said during her interview with Tarryn Kay Trussel van Louw on her show, The MVP Club recently.

Kairo's mama said her daughter was a “super-decisive” child and she believed this was inborn, as she doesn't think she taught her daughter how to be the way she is.

Supa Mega confirmed that he and Zinhle had indeed split in an interview on Metro FM.

“It’s been a crazy start to the year, I had to go away. I went on holiday. I was just speaking off-air that I went on a very cold holiday. As people might have noticed it’s my first holiday being a single man for many, many years.”

Since then, DJ Zinhle has gone back to keeping her private life private and just releasing news of her slaying work ethic. Sis is a headline act at the upcoming Ultra SA and business is booming.

Reminiscing on happier days they shared in the past, AKA shared a story with Helen Herimbi on her YouTube i (m) bali series recently, reflecting on how they met

“We got booked for this gig and I was so excited that she was booked for that gig coz' I was like 'Ohhh Yes!'. And you know … she didn't let me hit it on the first date though [ …] But I got her eventually [LOL].” he added.

He continued to credit Zinhle's presence in his life and her influence on his Levels album, which he regarded as one of his best works.