“Yes, we’re in a loving relationship and he makes me happy."

Dawn wore a mustard dress, which matched her man’s shirt. 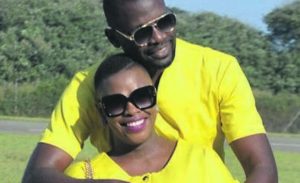 The two couldn’t keep their hands off each other.

The star had a ring on her right finger, while Mlungisi wore one on his wedding finger.'

The SunTeam has spotted the couple together a number of times this year, including at the Cothoza Awards in June.

They were also seen wearing matching outfits at the Simon Mabhunu Awards at the Durban Playhouse, KZN.

Speaking to Daily Sun, Dawn confirmed she was happily in love.

“Yes, we’re in a loving relationship and he makes me happy.

“It’s not like I’m cheating. We are both adults.

“For now, we’re still enjoying our privacy and each other’s company.

“We don’t want to go all out because both our families haven’t been properly informed.

“As a result, we’re keeping everything under wraps,” she said.

Dawn wouldn’t confirm whether Mlungisi was her fiance or husband.

“We’ll make an announcement once we’re ready,” she said.

He said: “I also work in the entertainment industry and I know how it works. I don’t want to be in the newspapers.”