Home Celeb Gossip Mzansi reacts to Mohale's old pic, You won't believe how much he...

Ah we love throwbacks, don't you? It just reminds us of where we come from.

#ThrowbackThursdays are quite a thing on social media, whereby various users jump on the bandwagon of posting either pictures or videos of themselves that were taken many moons ago. 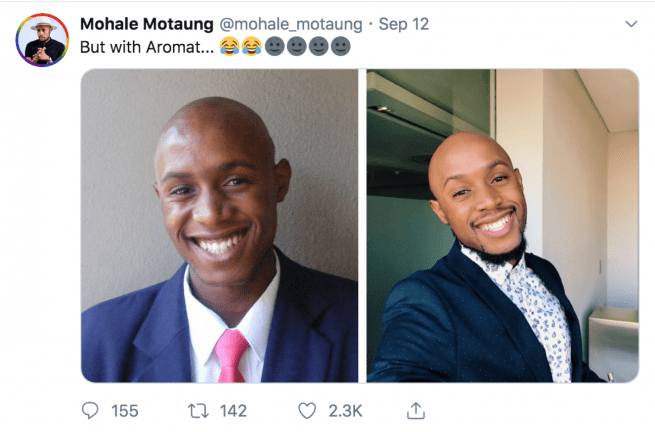 Not one to be left out on things, Reality TV star and businessman Mohale Motaung shared an old picture of himself on his Twitter account yesterday. Upon close inspection, the younger-looking Mohale is clad in what seemed like a school uniform(with a perfect batch clipped onto the navy blazer.). The picture was accompanied by a short caption; "But with Aromat".

The picture received mixed reactions from social media streets. Whilst some were hypnotised by Mohale's big beautiful smile; other's remarked that he looked a tad older than he does now and then some were just plain rude and super unnecessary,(Like they just had to drag Somizi into this!).

Take a look at the picture that caused a frenzy on Twitter:

Of course, Tweeps had a lot to comment on:

The better half of the comments were vile, however, this kind of social media hate is nothing Mohale has not dealt with before.

Last night's episode of, Living The Dream With Somizi was a trending topic on Twitter and boy did Mohale get dragged… Again!

The 23 year old's general personality and actions towards Somizi was once again put into question.

Tweeps questioned if he's genuinely gay, whilst some were adamant that he would probably win an Oscar for best actor because his pretending skills were on a hundred.

Well, it seems Mohale has remained quite unbothered by the barrage of negativity that he was met with yesterday. Homeboy's outchea doing this life AND love thing the best way he knows how.