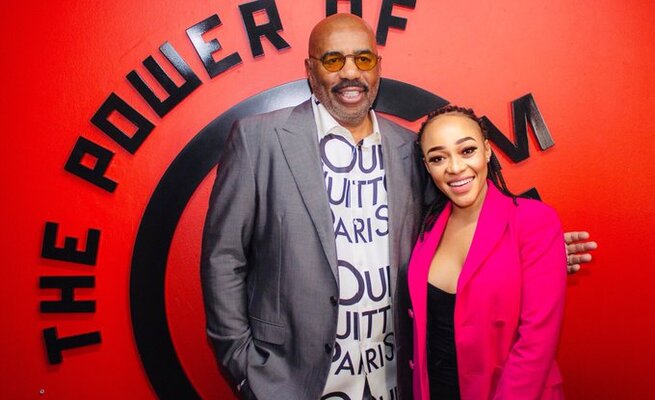 TV host, Steve Harvey is in SA. and Fans are excited of the news  his hit game show Family Feud will have its own SA version.

However, thats not he only thing the US star has in store for us. While on Thando Thabethe's Thabooty Drive Show on 5FM, he also played matchmaker for one of his sons.

“I have a couple of sons you need to holler at… scoop you up, you’ll be in Beverly Hills by Friday,” Steve said to the beauty.

Thando replied: "We can talk when we're done here… I mean, we can leave TONIGHT!" Obviously playing along because she's got Lunga Shabalala, right?

Fans encouraged Thando to take Steve up on his offer, but we doubt she would because she is boo'd-up!

The actress was, however, excited to meet Steve Harvey.

Tweeting some pics of herself and her "father-in-law", she wrote: “Thank you for a beautiful insightful, candid, honest conversation. Today will forever be inscribed in my heart."