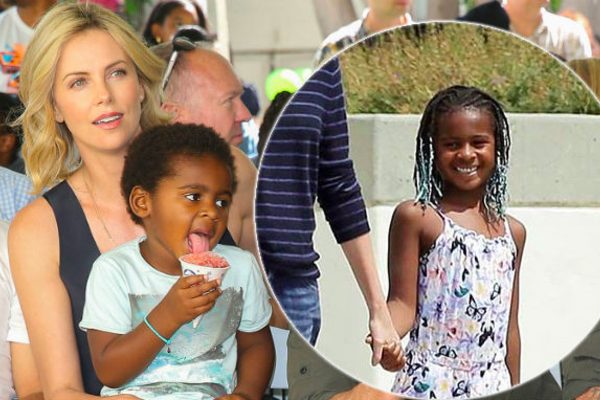 What shocked many is that the SA born star revealed that Jackson – who has been spotted wearing long braids and pretty princess dresses, knew he was a girl at age three!

(FYI – My three-year-old doesn’t know if he is a T-Rex, a great white shark or Mr Bean from one minute to the next).

Many criticised the actress for how she dealt with the situation as a parent.

Charlize Theron says her son is now a daughter because, “she looked at me when she was 3 yrs old and said, ‘I am not a boy!'”

I used to nanny for a toddler who insisted she was mermaid.

I (the adult) made her get out of the tub anyway.

So @CharlizeAfrica says her 3yr old son told her he was a girl.

My daughter (5) wants a boyfriend😭

As DAD, I explain Batman isn’t real, too young to date, and get a real job first!

See how that works?!

At 3 you dont let the child to decide what to eat, what to watch on tv, you dont understand when says lies or truth, you doubt if has stomach pain, plays different roles, but I guess is mature enough to decide be transgender. Obviously reinforced, no alternative option was given.

At 3 you dont let the child to decide what to eat, what to watch on tv, you dont understand when says lies or truth, you doubt if has stomach pain, plays different roles, but I guess is mature enough to decide be transgender. Obviously reinforced, no alternative option was given.

Others praised the star for allowing her child to be his authentic self.

More and more stars are revealing that they are allowing their children to choose to wear what they feel most comfortable in, even if it means dressing up as the opposite sex.
Take a look at these stars who are raising their kids to shun gender stereotypes…

Naomi & Lieb’s son Samuel aka ‘Kai’ identifies as the opposite sex and could easily be mistaken for a girl!

Too cute! #LievSchreiber's sons dressed up in costume at #ComicCon this weekend. Eight-year-old Kai was looking fierce as Harley Quinn. Go to JustJared.com for more photos of the boys!

“If a boy loves princesses and a girl loves baseball, that’s not indicative of their sexuality… It’s indicative of their communication and creative expression. We can’t limit children by telling them how they should play,” Megan said in a social media post.

Megan Fox & Brian Green out with their son in a Princess Elsa dress makes me so positive for the future. Let kids be who they want to be 👏🏽 pic.twitter.com/FX8rz2WEMu

Brian Austin Green/Megan Fox's son wears dresses, Dad's OK with that: "He's not harming anyone by wearing a dress. If he wants to, awesome." pic.twitter.com/9KZZjER2rm

The British soul singer is super private on her personal life, however reports revealed the star lets her toddler son Angelo wear anything he likes.

Adele says bye to gender roles and lets her son dress up as Anna from Frozen to go to Disneyland pic.twitter.com/EKtu5X4e9a

Mark’s daughter is quite the tomboy and is often heralded as her dad’s mini-me.

She even made an appearance on the red carpet dressed in a dapper tux!

can we talk about this adorable pic of mark ruffalo and his daughter pic.twitter.com/vZuBTeCKiF

From her early years, Angelina and Brad’s first born daughter Shiloh wanted to be identified as a boy.

“She wants to be a boy,” Angelina Jolie explained to Vanity Fair in 2010.

“So we had to cut her hair. She likes to wear boys’ everything. She thinks she’s one of the brothers.”

Angelina Jolie’s daughter, Shiloh, wants to be a boy, is the spitting image of a young Brad Pitt. See picshttps://t.co/rBxAWzKuNX pic.twitter.com/GJGE8NuQQo

Including a frilly Frozen dress on a recent trip to Disneyland!

Zoe often shops for her twin boys in the girls clothing department as they love everything “pink and glittery”.

Gwen’s son Kingston is often spotted in dresses, skirts and even paints his nails pink!

“It’s really important more than anything else to not be talked into something, to stand your ground and to be able to be strong about what you feel,” she said in an interview.

“I don’t want them to try to be like everyone else, and at that age, everybody just wants to have the same shoes everybody else has, and I don’t really like that. If they do want to, I’ll support that as well. You just want them to be happy. It’s a short life and it goes by so quick.”