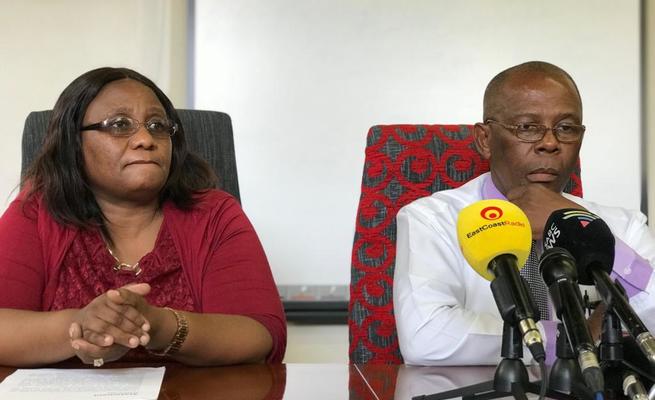 When gqom star Babes Wodumo told her dad last year that she had been beaten by her boyfriend, he knew he had to do something. He “sat down” with musician Mandla “Mampintsha” Maphumulo and begged him to stop.

He also met Mampintsha’s father to try to put an end to the abuse.

“My God is a witness, I don’t hate Mandla,” Welcome Simelane said this week. “I sat down with him, like a father and son would, and I said to him: ‘Mandla, please stop hitting my daughter.’”

Mampintsha, 36, was arrested on charges of assault and released on R2,000 bail. He then made a complaint of assault against Babes Wodumo. He did not respond to requests for an interview.

Simelane said he was heartbroken when his daughter first told him about the abuse.

“She said: ‘Daddy, there’s something that you don’t know about Mandla. Mandla is abusive,’” he said.

The meeting was after Metro FM’s Masechaba Ndlovu, during a live interview, asked Babes Wodumo about the abuse claims.

It was after this interview that Simelane decided to meet Mampintsha’s father about the allegations.

“I called his father. We met at the Elangeni Hotel [in Durban]. I said: ‘I love Mandla because my daughter loves him. Anybody that is loved by my daughter, I also love that person because I believe that person loves my daughter too,’” he said.

Mampintsha’s father, according to Simelane, said he would talk to his son.

Simelane said he had been under the impression the abuse had stopped — but then his son came forward recently after witnessing Mampintsha apparently beating Babes Wodumo after an event.

In a live TV interview this week, Simelane said his son could not eat after seeing his sister being beaten.

Simelane said his daughter told him she had decided to expose the abuse because she feared for her life.

“She said: ‘Daddy, I was about to die. I saw him. And he told me he’s going to kill me today. So I decided when he went to the toilet that I will open this phone because I wanted you and other people to understand how he killed me,’” Simelane said.

The emotional father said he had previously tried to talk to his daughter about leaving Mampintsha. He had been in a difficult position because she loved Mampintsha.

Simelane said that even though she was not yet ready to speak to the media, she was “happier at home now” and is a “strong young woman”.

Babes Wodumo entered the entertainment industry as a dancer and began gaining popularity in 2014 when she featured on the late Sir Bubzin’s song Desha.

While trying to become established in the industry, she met Mampintsha, who was part of kwaito group Big Nuz at the time.

Both have publicly spoken on several occasions about Mampintsha “discovering” her when she was just 16. Mampintsha was 28 at the time.

At the time Big Nuz was one of SA’s biggest kwaito groups. Mampintsha would later start his own record label, West Ink Records, and signed Babes Wodumo as his first artist.

Simelane said his daughter’s drive to be a star allowed her to meet the right people, but also led her to Mampintsha.

“But what Mampintsha is busy telling the world, that he made Babes what she is … he is lying. Babes was already modelling, doing backing vocals for some other artists, and much more,” he said.

After being released on bail on Tuesday, Mampintsha told journalists that Babes Wodumo had beaten him up and claimed she had a drinking problem.

But Simelane denied this.

“Everything that Mandla is saying about Babes is a lie. Babes was raised in a church environment and we taught her better,” he said.

It emerged on Wednesday that Babes Wodumo has been named in with another assault complaint by a woman whose identity has not yet been confirmed.

Police said a case of common assault was opened at the Umbilo police station in Durban on Tuesday. It was based on an incident that happened on Monday — the evening after the Instagram video was broadcast.

The Simelane family spokesperson, Sakhile Mhlonishwa Langa, said the family would meet to discuss the situation and would seek legal advice.