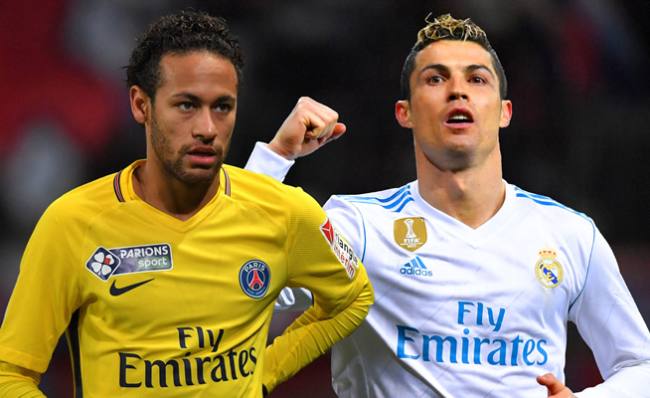 TVE reported Real were ready to splash out on a figure far above the record 222 million euros PSG paid for Neymar last year in a move from Barcelona, but late Monday Real denied the story.

On Tuesday Spanish newspaper Marca claimed Madrid talisman Ronaldo is interested in joining Juventus, after Tuttosport said he had reached an agreement with the Italian club on a contract until 2022 worth 30 million euros a year.

Ronaldo, 33, is said to be unhappy at Madrid and the reigning European champions may accept a bid significantly lower than the Portuguese forward's 1 billion euro release clause.

Should Ronaldo, Madrid's all-time top goalscorer, leave after nine successful years at the Santiago Bernabeu, the Spanish side would need significant reinforcement to fill the gap.

Speculation over a move for Neymar has been going on since Real president Florentino Perez said the Brazilian had a better chance to become World Player of the Year at Real than at PSG.

"In light of information broadcast tonight by TVE regarding an alleged Real Madrid offer to PSG and their player Neymar, Real Madrid wishes to state that this information is absolutely untrue. Real Madrid has made no offer of any kind to PSG or the player," Real said on their homepage.

Neymar, 26, is at the World Cup in Russia and on Monday helped Brazil reach the quarter-finals with a goal and an assist in a 2-0 win over Mexico. His contract at PSG is until 2022.

Ronaldo and Portugal were knocked out of the World Cup in the last 16 by Uruguay. The striker has a deal with Madrid until 2021.

Should Madrid secure a possible Neymar transfer it would open the door for Ronaldo to move and could also impact on Welsh winger Gareth Bale's future.

Bale may also leave after helping Real to a third straight Champions League win with two goals against Liverpool.

Real also have a change at the helm, with former Spain coach Julen Lopetegui taking over after the surprise departure of Zinedine Zidane.