THE Meyiwas are still mourning Sam’s death. But it seems community members of Adam’s Mission, south of Durban, are not allowing this family time to mourn in peace.

They’re adamant that the family should demolish that house Senzo Meyiwa was building in the area, before his death.

Last year, Sunday Sun reported about the concerned neighbours who were calling for the demolition of the late soccer star’s house, saying it had turned into a hideout for thugs and sex spot for the local youth.

The house has not been demolished and neighbours said the situation has worsened.

One of the neighbours, who wished to remain anonymous, said sometimes she hears noises, especially in the afternoon, and then sees teenage couples coming out of the house.

One neighbour said: “This house must be destroyed. I’m sure there are teenage girls who have gotten pregnant after having sex in this house. Sometimes, we see schoolgirls and older men coming in and out of the house. Teenagers use it for drugs. We’re afraid this worsens the crime rate in the area.

“I sometimes have to pick up used condoms as I’m afraid my kids could play with them.

Another neighbour, who didn’t want to be named for fear of reprisal, said last month he survived an attempted house robbery by people he claimed use the house as a hideout.

“I’m staying with my kids and my house is next to this house.I live in fear as the house is used as a hiding place for the youth who want to have sex, do drugs and those who want to rob people passing by.”

“Last week, I heard the knocks on my door. My kids were already asleep. I ignored and later I heard people asking me to open up. I tried to watch them through the window, and noticed it was three teenage boys and I realised that they were thugs who wanted to rob my house. They could not force the entry because I have the burglar guards on windows and a door. I am scared, something must be done,” said the neighbour.

Neighbours said when they heard the house belonged to the late goalie, they were excited, not knowing their excitement would be short-lived. 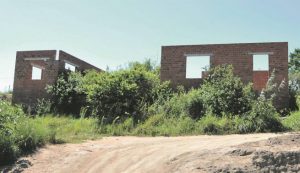 Senzo died in October 2014 in Vosloorus, Ekurhuleni, while visiting his then singer girlfriend, Kelly Khumalo.

since it is now a curse in their lives.Five years later, his murder is yet to be solved.

Meyiwa family spokesman, Sfiso Meyiwa, said they are aware of the neighbours concerns but they won’t demolish the house.

“We have plans with regards to that house. Our plan is to finish it as we plan to do something with it. and use Senzo’s name, before we finish it. I won’t divulge the plan until it’s launched. Media will be alerted as well,” said Sfiso. Induna called us, asking about what we were planning to do with the house. We assured him that we would get back to him with the final plan,” he said.

He revealed that the family last spoke to Adams Mission local leadership early this year.

Local Induna Mbongeni Makhanya said he’s had talks with the Meyiwas, but refused to comment further, saying the family should answer the SunTeam’s questions.