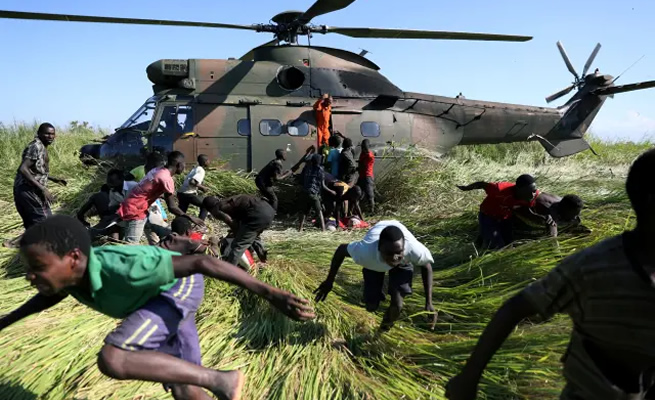 Unseen footage and pictures of the attack by Islamist militants on the northern Mozambique town of Palma give a glimpse of the full extent of the carnage.

Images obtained by Sky News show bodies strewn on the ground, signs of 'help' made out of toilet paper and sheets and attacks on escape cars after the attacks began.


Information on the attacks has been scarce as communication from the area has been cut.

It's been estimated that dozen of people were killed in the attack, but because of interrupted cell and internet services, the true death toll is not known.

Witnesses described to BBC how they had to flee the area after hearing gunshots. They spoke about the terror of the experience, describing how they spent days on the run without any help from authorities.

The attack on the area, which houses a gas production facility, had been predicted by analysts for years.

Sky News reports it could be a precursor of more violent battles to follow.

Al Jazeera reported authorities said a significant number of fighters had been killed in the government's battle to regain control of the area.

"Our team saw bodies still lying in the street and multiple shops, offices and homes, as well as a hospital that had been vandalised and set alight," Sky News reported.

The mobile phone mast had been destroyed and power lines pulled down.

ISIS Mozambique, also known locally as al Shabaab, says it carried out the attack with residents telling us that it appeared well planned.

The attackers mounted the assault on the town from three different directions and were well armed.

Residents told us they were shooting indiscriminately and wielded machetes, with several witnesses telling us they carried out beheadings.

The streets were littered with spent bullet cartridges.

Dozens are believed to have died in the attack, including a Briton and South Africans who were working in the region.

Thousands fled the fighters and hundreds are still hiding in the surrounding bush.

We were flown in by military helicopter – the only way to reach the town which has been cut off for nearly two weeks.

We accompanied the region's governor, Valige Tauabo, who was seeing the destruction himself for the first time.

He was visibly shocked at the wanton violence and damage.

"They have destroyed a lot of vital infrastructure," he told us. "But you can see we were able to get here and you are able to walk around safely.

"We are hoping the people can return to their homes within three days."

I asked him outside the destroyed hospital in the centre of Palma whether he could guarantee another attack would not happen.

"This, I cannot say," he said, frankly. "All I can say is we are here with our troops and we feel okay."

He refused to be drawn on whether this attack and others were orchestrated by Islamic extremists linked to ISIS, despite the terror network claiming it had carried it out.

Videos posted on the terror network's social media outlets claim to show what looks like dozens of fighters gathering immediately after the Palma attack.

Many of them were dressed in camouflage military clothing and were wearing red bandanas.

The Cabo Delgado region is predominantly Muslim and it is not known for any religious disunity.

The Mozambican president himself is from the area and the authorities have been horrified by the scale of the assault which analysts have called a "game changer".