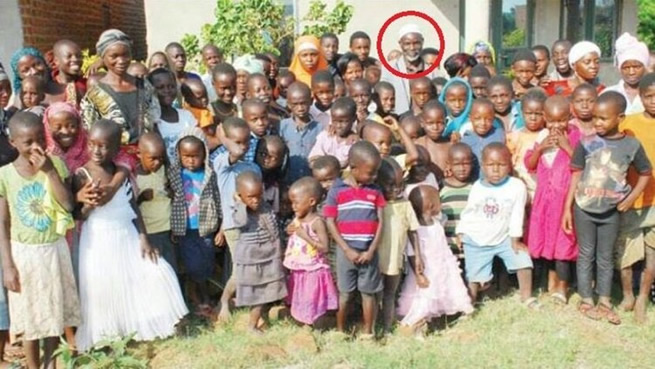 Mustafa Magambo Mutone, 69 years old, is a popular man in Kagadi, West Uganda. He is proud of having 13 wives, 10 girlfriends, 176 children, and 90 grandchildren.

The man was born on January 1, 1952, in Kiryabwenju, Muhorro, Kagadi town. Currently, he has business with products in beans, corn, and coffee at a trading center.
Having the first wife when he was 16

In 1968, at the age of 16, he had his first marriage. After that, he continued to getting married and even having affairs. As his wives and lovers kept giving birth, his number of offsprings just kept multiplying.

The 69-year-old man said that his 40 kids are in primary school. That is why he was planning to establish a primary and high school for his own family in Kyaterekera.

10 children of Mustafa Magambo Mutone are pursuing their studies at Makerere University, Mbarara University, and Kyamgobo University in Uganda. Among his kids, there are five sets of twins.

“Two of my twin-daughters are in Kampala and Isingiro, who work as midwives, while another two – Haniffer Kabasomi and Jane Tuhaise – work as nurses. My youngest wife is 25, and the oldest is 50, but I had about 10 girlfriends before I went officially and they delivered the same year.”

Mutone’s firstborn is now 51 years old while the youngest is the 6-year-old twins. In the future, it very seems that Mustafa’s army will increase as some of his wives are pregnant. He even has 90 grandchildren after the children matured and got married.

Not only having wives in Uganda, Mustafa even married some abroad women. From Congo, Burundi to Rwanda, they are all countries in Africa. Hence, his biggest challenge when having a bunch of wives is they locate in different regions. They are also in foreign countries and not every wife lives with him.

“I receive about 10 calls each day from different wives who want attention, but I can not be everywhere. I have seven wives in Kagadi. And I have no challenge to support them because some of them support themselves because they work,” said Mutone.

His kids and grandkids can make a whole school

Mrs. Madina Tibasiima, 47, one of his wives, has had nine children. She claimed to have no problem living with a big family and her husband having numerous wives. Most of her kids are officials, nurses, and soldiers.

One of Mutone’s children, the 42-year-old Kyaise Suwedi, is a resident security staff. His monthly rate is used to support his siblings’ studies.

Meanwhile, Muhamad Byarufu, 47, is another son who owns a company. He also has to pay the tuition fee for some of his brothers. Moreover, his family can totally build their own schools as some of the family members are teachers. They may also hire more teachers from outside.

Despite having a lot of spouses and children, Mustafa Magambo Mutone is still confident that he is afforded to feed his family. Besides, as they have a great organization and those who have a job can take care of the others, they hardly have to deal with the underprivileged condition.

In an interview with Uganda’s journal News Vision, he strongly claimed that he is still attractive and can totally get more wives despite he is in his 70s. Mutone revealed he could even have more kids. His tips to maintain prosperous health is having no alcohol, no smoking, and cutting down on sugar.