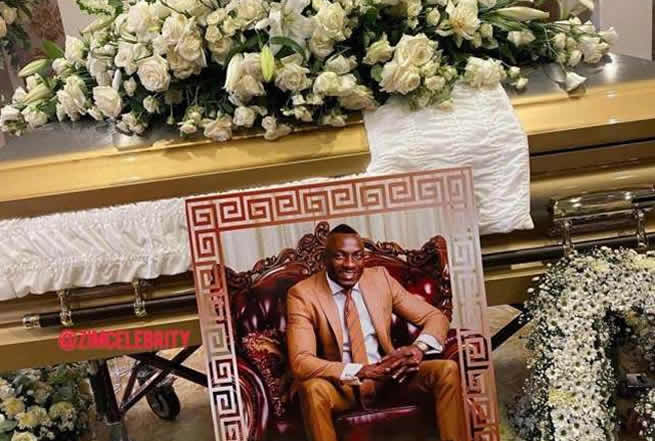 Living in a multi-million-dollar mansion, driving expensive cars and flashing money, the late socialite and businessman Genius “Ginimbi” Kadungure went on to be buried with a fortune in Nyamande village, Domboshava on Saturday. 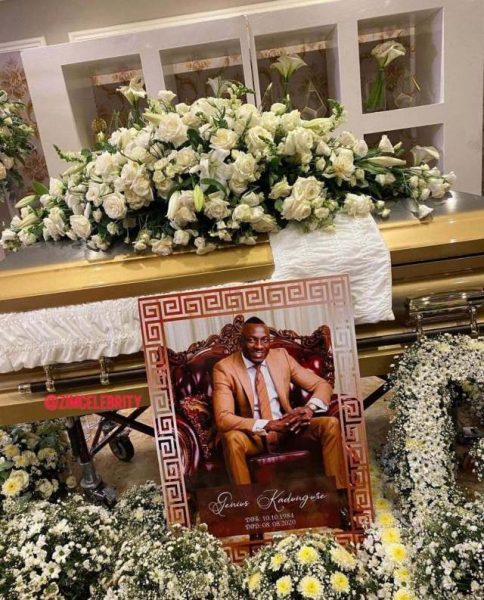 A self-proclaimed millionaire Ginimbi, (36) who died in a horror car accident along Borrowdale road in Harare last Sunday was buried in an imported customised golde Versace medusa print casket.

The casket that was imported from South Africa, courtesy of Friends of Ginimbi, has a price tag of between US$5 000 to US$12 000.

With high poverty levels in Zimbabwe, some people might not set their hands on such an amount in their lifetime, but as befitting his lifestyle, Ginimbi’s burial showcased the opulence that was the hallmark of his life.

Ginimbi died after his Rolls-Royce Wraith collided head-on with a Honda Fit while on his way to Domboshava after a night of partying at his Dreams Night Club in Harare.
He died together with Malawian Limumba Karim, fitness trainer and video vixen Mitchel “Mimi Moana” Amuli and Mozambican model and socialite Alichia Adams.

Karim, Amuli and Adams were trapped inside the car and burnt beyond recognition, while Ginimbi was pulled out just before the vehicle exploded into flames.

Friends of Ginimbi spokesperson Ronald Muzambe told NewsDay Life & Style that Ginimbi’s casket was bought from contributions by his friends.

“Many people wanted to buy the casket for Ginimbi. We then decided that no individual should buy the coffin and it was then bought through contributions. We thought of making him a custom-made Versace casket because it was his favourite brand,” he said.

“After putting the contributions together, some money was used to buy the coffin and some to cover funeral expenses. So, it was a joint effort, not an individual job.”

The fight over Ginimbi’s vast wealth

While Ginimbi might now be under the surface and unable to call the shots, the vast empire he left behind is alleged to have divided his family.

Some sources close to the camps yesterday said Ginimbi’s ex-wife Zodwa Mkandla who could not be immediately reached for comment was flexing muscles to have everything at the mansion under her arms as the known “surviving spouse”.

“There are a lot of issues that need to be ironed out. Remember Zodwa as the former wife played a big role in the rise of Ginimbi’s empire and this is known by both friends and relatives. Of course, Ginimbi had rich friends along the way, but it was much of Zozo’s input and efforts that we talk of this million-dollar mansion today,” said the source.

“Hopefully the Samkange and Venturas law firm Ginimbi has always used will be able to professionally handle this issue. It is said Ginimbi’s had a will which then makes it easier to deal with the issues of execution of his massive estate.”

Police give special treatment to Ginimbi in death

Ginimbi’s funeral drew large crowds beginning on Friday where hundreds of people, among them international dignitaries turned up at a funeral parlour in Harare as his body was being collected.

The late flamboyant socialite was mourned in a way that will probably go down in the annals of history as the best.

His death grabbed headlines beyond the borders and trended on different social media platforms.

On the burial eve, a music concert was held at his mansion in what appeared to be a special treatment bestowed to Ginimbi by the police who had publicly banned the concert.

The police had warned Ginimbi’s family against flouting COVID-19 regulations, surprisingly the concert went ahead despite that musical performances or concerts have remained prohibited.

Despite the warning, scores of people among them police officers turned up for the concert which was headlined by Jah Prayzah with performances by Killer T, Winsor, Allanah, Ndunge Yut and popular outfit Judgement Yard.

At the concert there was hardly any social distancing and the majority of people were not wearing masks.

A glimpse of Ginimbi’s lavish lifestyle at funeral

Known for his flamboyant lifestyle, his friends certainly were not about to dress down, even for the funeral of one of their own. A host of Ginimbi’s rich friends local and international came driving top-of-the-range cars.

They were also dressed in expensive designer clothes and some of the pals were dressed in all white in respect of their friend’s famed all-white parties.
While funerals are generally sad events, Ginimbi’s friends did not slow down on the partying, gulping down their expensive whiskies in groups inside the mansion to which only a lucky few managed to gain entry.

Several speakers at the burial spoke glowingly about Ginimbi, describing him as a unifier as evidenced by the number of people that turned up for the funeral.

Ginimbi’s ex-wife Zodwa said the funeral showed that Ginimbi was loved by many, adding that he was her good friend.

“I did not realise that Zimbabweans love Genius this much. I met him (Ginimbi) in 2009 at the airport. Genius was a player and he would make you believe you were the only one in his life,” she said.

“Genius was a character; I have never met anyone like him. When he loved, he loved and when he played, he played hard.”

She also spoke about his assets that include the mansion and top-of-the-range cars.

“Genius wanted the best of cars. When we started to build the house I never thought he was going to finish it, put the tar and later electricity,” she said.

“My wish is for baba (Anderson), Julie (Ginimbi’s sister), to make the name of Genius go on, let us make sure what he wanted is achieved. Let the place be maintained to its status. If the mansion is to be turned into a museum or hotel let it be for the benefit of the Kadungures”

Ginimbi’s father, Anderson, said he was grateful to his son’s friends and all those who assisted with funeral expenses.

“Ginimbi was a man of the people. As his father, I appreciated it this past week. I am very grateful to his friends who have stood with us until today,” he said.