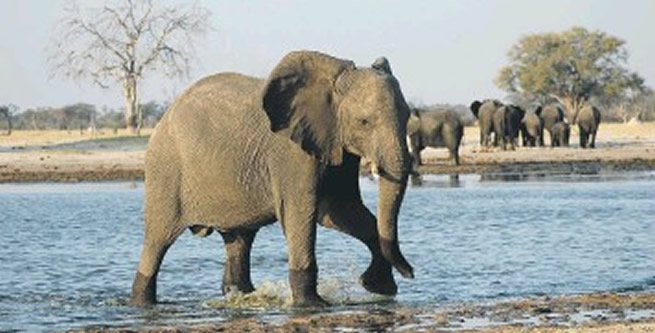 The news has conservationists and communities, as well as the tourism sector and safari operators, on edge.

Although it has not been confirmed that coal mining will take place in the park, wildlife nonprofit organisation Bhejane Trust posted on social media on Wednesday that its rhino monitoring team found Chinese nationals in Hwange Park. They were drilling core samples for coal.

The Chinese were arrested by park officials and handed to police, but soon reappeared with a permit to continue the exploratory drilling exercise.

The area manager was not consulted, which led to the discovery that government had allocated two coal mining concessions in the middle of Sinamatella and Robins camps in the park.

Critically endangered black rhinos roam in the Sinamatella area. Mining activities would put the lives of rhinos, large elephant populations and a host of other species at risk.

According to Bhejane, the companies are Afrochine Energy, part of the China-based Tsingashan Group, and Zimbabwe Zhongxin Coal Mining Group.

Bhejane Trust director Trevor Lane condemned the lack of consultation on the drilling operations, saying the organisation had only been sent a questionnaire from SustiGlobal, an environmental impact assessment (EIA) company, after it found out about the drilling.

Lane said the EIA was not dated and consisted of a half-page of half-hearted questions about the prospect of coal mining in the area. However, he was upbeat the exploration would be stopped after attending a meeting yesterday. He said government was being put under pressure and ministers were already attending meetings.

Colin Gillies from Wildlife and Environment Zimbabwe (WEZ) said he and others “are really worried about this”.

“So many people are absolutely devastated something of this nature may happen.”

He said WEZ was unaware about the drilling until it was informed by Bhejane Trust.

Gillies said coal mining activities were increasingly encroaching on the park’s borders, with indications that companies wanted to infiltrate the park.

“You’ll never fix the area where mining takes place. There are huge coal reserves in other areas as well.”

Aside from sealing the fate of wildlife in the area should coal mining go ahead, Gillies and Lane said it would be a fatal blow to the country’s tourism industry. “It will be the end of the park as we know it; the top half of the park would be a write-off,” Lane said.

Gillies pointed out that, ironically, the region selected for mining exploration was in an area where there were three luxury camps developed at huge expense.

This, along with the loss of jobs, would be a huge blow to tourism. “If there is a coal mine in the middle of a park, people will not go there.”

Gillies said Zimbabwe’s financial situation was precarious at best before Covid-19 and the pandemic had had a detrimental effect on the tourism sector, which was scrambling to recover.

Lane said his team was not panicking at this stage, but it was important to raise awareness “before it gets out of hand”.

He postulated that concessions might have been granted without fully appreciating the implications, but that significant pressure from at least 50 tour operators in the area should allow for urgent mediation from government.