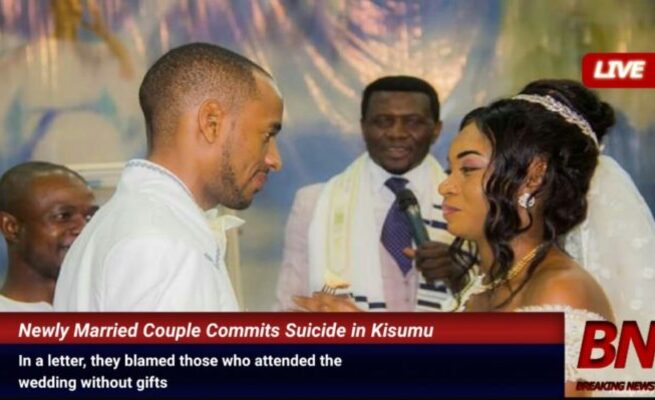 Two families in Kisumu are mourning their two children who together committed suicide 4 days after their beautiful wedding.

According to Sources, the newly married couples allegedly killed themselves because of the huge debt they incurred after their wedding. Mr. & Mrs. Odipo left a note that they were stressed & strained because the beautiful wedding they had, left them with a debt of Ksh 7.9 Million.

In the letter, they also stated that they could not go to honeymoon as planned. They blamed those who attended their wedding of coming only to feast with no gifts.

” We are embarrassed & ashamed that we could not start our new life in happiness because you people did not make us happy as we expected, ” the letter reads. A family member who spoke to The Daily Statesman said the wedding was held in a five-star hotel which he declined to mention the hotel’s name. She also revealed that 90 % of those invited were special guests VVIPs & VIPs pointing out the two couples used to brag how their guests will bring gifts in Millions of cash money.

She also said 3 choppers were hired one for each family & another for the couple. A neighbor to the husband said he once told him during the wedding preparation that he will use all his savings to finance the wedding since his guests are millionaires who will each come with sh1.5 Million.

He added that those who attended the wedding only brought flowers & Best of Luck cards.

General News Njabulo Maseko - 3 April 2020 0
With South Africa now a week into its 21-day coronavirus lockdown, government has had to address a number of loopholes and issues which were...

Taxi operators threaten to strike against social distancing in taxis

Celeb Gossip Dumisani Mangena - 3 April 2020 0
Actress, TV personality, and human-rights activist Nomzamo Mbatha is an inspiration, especially to the African child. She is passionate about what she does and...

Fresh headache for government: Lockdown set to be extended as South Africans refuse to...

General News Flaxie Mkhize - 3 April 2020 0
Eight days into the three-week lockdown, a significant number of South Africans are refusing to stay indoors, and risk contracting and spreading the deadly...
Loading...