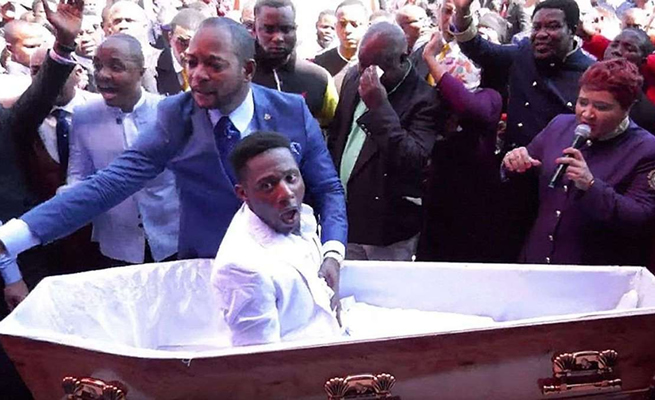 Chuggy’s dim bedroom has a tiny table, copies of “important documents” and what he calls his “cash tools.” They are a Lenovo laptop, laminator, printer, forgery stamps and boxes of blank paper.

He works from the underworld, printing fake theology diplomas for would-be pastors in South Africa.

“Anything goes,” said Chuggy, who hides his true name out of fear that South Africa’s police detectives could sniff him out. “Need a forged pastor’s Bible school diploma? Tell me your price.”

No jobs in South Africa

South Africa is currently gripped by the world’s highest unemployment rate. In 2021, deadly anti-poverty riots broke out in South Africa. In March, the World Bank called South Africa the world’s most unequal country. In this agony, one sector is wildly prospering. And there is an explosive growth of Africanized church movements, especially in the category of the independent African Pentecostal, Evangelical spiritual, and Baptist niche.

In an ailing economy of few opportunities, pastor jobs are some of the most sought-after. The pastorship, in South Africa, is often a ladderway to personal enrichment.

“In a country of record joblessness, being a pastor is a chance for the unscrupulous to feast on tithes, get lavish allowances, a $4,000-plus salary, and public adulation. It’s essentially an escape from racialized poverty. Hence the pastor diploma qualification is in hot demand, and so is the forgery industry,” said Dean Xulu, a retired documents forensics expert.

Now the documents forgery industry, fronted by the likes of “Chuggy” has entered the fray, charging for those seeking to dishonestly acquire the lucrative pastor diploma/degree certificate without properly spending years in theology college training.

“It’s not just native South Africans seeking my forgery services to acquire a pastor’s diploma,” said Chuggy, who charges $400 U.S. for a fake pastor theology school certificate. “It’s immigrants too who see South Africa as a fertile ground for opening churches for self-enrichment.”

Scandals and corruption in the avalanche of churches being opened by immigrants in South Africa have led to high-profile arrests of foreign pastors working in South Africa, extraditions, bail skipping by mega-pastors facing money laundering, “fake miracles,” rape and fraud offenses. In 2019, the BBC famously declared: Fake pastors and false’ prophets as rocking South Africa’s faith.

Chuggy’s clients, he said, don’t mind at all about the quality of the paper he forges pastor diplomas on as long as they get the lucrative diploma. “I got all sorts of fake stamps for pastor diploma certificates, and yes, they appear genuine.”

Serious crime detectives in South Africa are seized with prosecuting some cases where forged pastor degrees are being used by dishonest people to be appointed to the clergy. This month a Presbyterian cleric appeared in a South African court charged with buying a fake theology degree from underworld runners like “Chuggy” and thus earning a high salary serving a congregation. The scandals of pastors allegedly acquiring fake diplomas began to emerge in 2016 inside the country’s Seventh-Day Adventist faith. In 2016, 53 colleges in South Africa were marked by the country’s higher education minister as providing bogus qualifications. A staggering 21 of these fake diploma-offering institutions hailed from the religious sector.

“In the last three years I’ve seen an increase in several families coming to me for mentorship, keen to have their children become pastors, not nurses, paramedics or civil servants,” said Tichaona Mwachita, a bishop in the Apostolic Africa Independent Church, which has 1,000 worshipers in South Africa and neighboring countries.

“I asked, ‘Why the passion for the pulpit?’ Several parents confide to me that, in a troubled economy like South Africa, the pastorship is one of the few high-paying jobs left. Being a pastor is a safe bet job, money-wise.”

Calls for ethical regulation of churches by the state in South Africa continue to fall on deaf ears as the menace of fake pastor qualifications flourishes.

“First, sensitive freedom of worship alarm bells will be triggered if the state dabbles in pastor registration. Second, the majority of South Africa’s politicians are folks of dubious morals and close friends with profiteering pastors,” explained Dean Sako, a retired head missionary with the Zion Christian Church of South Africa.