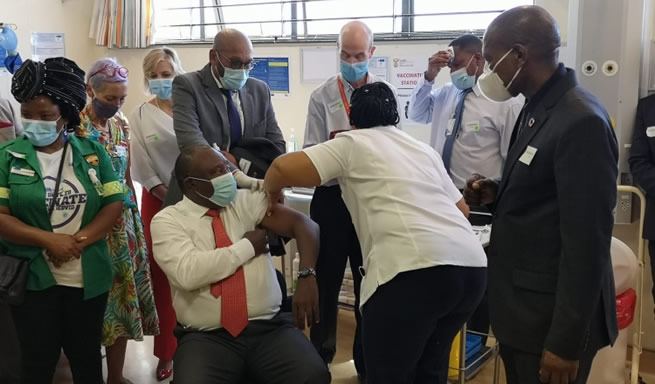 Pharmaceutical companies Pfizer and BioNTech have submitted data to the US Food and Drug Administration (FDA) to support the evaluation for a third dose of the Covid-19 vaccine.

The companies said in a statement that people who received a third jab of the mRNA vaccine showed “a favourable safety profile and robust immune responses.”

This data also will be submitted to the European Medicines Agency (EMA) and other regulatory authorities in the coming weeks.


“Vaccination is our most effective means of preventing Covid-19 infection – especially severe disease and hospitalization – and its profound impact on protecting lives is indisputable,” said Albert Bourla, chairman and chief executive officer of Pfizer.

“Still, with the continuing threat of the delta variant and possible emergence of other variants in the future, we must remain vigilant against this highly contagious virus.”

“This initial data indicate that we may preserve and even exceed the high levels of protection against the wild-type virus and relevant variants using a third dose of our vaccine,” said Ugur Sahin, chief executive and co-founder of BioNTech.

“A booster vaccine could help reduce infection and disease rates in people who have previously been vaccinated and better control the spread of virus variants during the coming season.”

Pfizer noted reports of adverse events following the use of its vaccine, which suggests increased risks of myocarditis and pericarditis, particularly following the second dose.

In clinical studies, adverse reactions in participants 16 years of age and older include:

In a clinical study, adverse reactions in adolescents 12 through 15 years of age include:

Debate is also accelerating in the US and Europe over whether booster shots will be needed, and if so, when and in which subgroups of patients, Bloomberg reported.

Pfizer has cited data suggesting the efficacy of its vaccine against mild cases may start to fade after around six months, even though protection against severe cases remains strong. Meanwhile, Moderna Inc has said trial results show that its vaccine held up well over six months. But executives from both companies have argued that people will eventually need booster shots.

Earlier this month, a preliminary study conducted by Israel’s largest health maintenance organisation found that most people who received a booster shot of the Pfizer Inc-BioNTech SE Covid-19 vaccine had similar or fewer side effects than they did after the second dose.

Of the 4,500 respondents to the survey, 88% reported “a similar or better feeling” than their reaction to the previous dose, with 31% saying they had localized effects like pain or swelling in the area of injection, according to a statement from Clalit Health Services earlier in August.

Approximately 15% of people had other symptoms like tiredness, muscle aches or fever. Less than 1% reported difficulty breathing or chest pains, Bloomberg reported.

Israel became the first country in the world to disseminate booster shots widely in a bid to quell a surge in new cases.

By comparison, 2,125,936 single-dose Johnson & Johnson vaccines have been administered, according to the National Institute for Communicable Diseases (NICD), a division of the National Health Laboratory Service.

The institute reported 7,983 new Covid-19 cases in South Africa, representing a 21.1% positivity rate. As per the National Department of Health, a further 299 Covid-19 related deaths have been reported, taking total fatalities to 77,440 to date.

The total number of vaccines administered in the past 24 hours is 158,103.