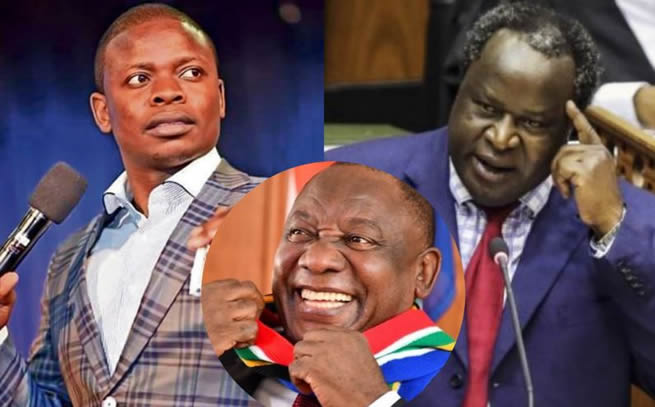 South Africa’s security agencies are investigating credible claims that fugitive self-proclaimed preacher Shepherd Bushiri has been in the country several times since his dramatic escape in 2020 – the most recent visit being just two months ago.

And they are trying to establish how, during his last foray into the country, Bushiri managed to slip through a tight security cordon that had been set up to apprehend him.

The controversial founder of the multinational money-spinning Enlightened Christian Gathering and his wife Mary fled South Africa in the dead of night last November while out on R200 000 bail. They were facing charges of fraud, money laundering and theft worth more than R102 million.


he couple was also accused of contravening South Africa’s exchange control regulations. In terms of their bail conditions, they were barred from travelling anywhere in South Africa, except within Gauteng and North West.

Their passports were handed over to the investigating officer. Despite all this, they managed to flee to their home country.

The incident left South African authorities severely embarrassed and exposed the porousness of the country’s borders, as well as the vulnerability of officials to bribery.

Security insiders told City Press that Bushiri had been in South Africa on three different occasions, but they only picked up on received intelligence on his second visit.

Both the Hawks and the State Security Agency (SSA) are said to have been made aware of his presence and the information had reached Cabinet. Well-placed sources said the last time Bushiri was in the country was in early April. It is alleged that he entered the country by land, the same way he escaped last year.

City Press learnt that, after discovering he had been in South Africa before, the country’s security agencies picked up information in April that Bushiri and his wife were around.

He was tracked down to Fourways in Johannesburg and an operation led by the Hawks was set up to nab him. According to sources, the team consisted of 36 cars but, to their embarrassment, the team returned empty handed.

An insider said when the fleet of cars arrived at the gate of the estate, the security guards refused to let them in, demanding a search warrant before they could enter.

“As the officials were busy negotiating with the guards, somebody alerted Bushiri of the imminent danger.”

When the two Toyota Corolla sedans arrived separately, they were questioned by the officials and the drivers gave a false address for the pick-up inside the complex.

“The drivers never mentioned the address where Bushiri was because they were given strict instructions not to,” said the source.

“The first Uber to leave the complex had two bodyguards, who then informed Bushiri that it was safe to sneak out because the officials were not checking the cars going out of the complex and that’s how he got out.

“After he [Bushiri] was out, the guards allowed the law enforcement officials into the estate. When they got into the house, they found Bushiri’s nephew, niece and another lady,” said the source.

It is understood that senior officials at the SSA were not persuaded by the Bushiri tip-off and insisted that no official operation was ever sanctioned to look for him.

They suspected that the informant was trying to make a quick buck, claimed the source.
The Hawks are keeping a sharp eye on him, and he is busy fighting an extradition process, so the chances that he would take such a big risk by sneaking into the country are very low at the moment
Source

Officials close to the investigation said their understanding was that the SSA side abandoned the surveillance as soon as the credibility of the informant came into question.

The agency doubted that Bushiri would risk an arrest based on the reasons advanced by the informant, who had claimed that he would also use the time here to check on his lovers.

“The Hawks are keeping a sharp eye on him, and he is busy fighting an extradition process, so the chances that he would take such a big risk by sneaking into the country are very low at the moment.

“Our guys went to see this person and when they came back, it was clear that the tip-off was more about money than credible intelligence. We decided to drop this thing right there,” said an insider.

However, an SSA official admitted that the country’s borders were so porous it was possible anyone could sneak in and out undetected. But SSA spokesperson Mava Scott said they had not had a role in the operation.

“We have no mandate to arrest [anyone] so we couldn’t have been part of the operation,” Scott said, before referring all enquiries to the Hawks.

Head of the Hawks Lieutenant-General Godfrey Lebeya refused to comment, only saying: “We are not going to talk about the activities that have happened or have not happened.”

Efforts to get comment from the Malawi embassy were unsuccessful as their phones rang unanswered.

Home Affairs Minister Aaron Motsoaledi said the border movement control system would have been able to detect Bushiri if he came through the border using any of the five passports that were known about. He said his department was never briefed on Bushiri’s alleged activities in April.

“We have tagged all the passports and whenever he would enter any port, it would be flagged by the system. Whether he uses an airport or seaport, as soon as the passport is scanned, it would send out an alert of a wanted person,” Motsoaledi said.

The minister said the issue of borders being porous was a global problem and that people and illegal substances are smuggled through the border often.

However, he said, for smuggling to happen through the border entry point – the actual port of access – would require some collusion with officials in the six departments operating at the border, including home affairs, the police and the SA Revenue Service.

“So, if there is a syndicate which works with officials of these departments, anything can happen. Anything can be smuggled in, including people. Because then the human beings who are supposed to be stopping that would be collaborating. We cannot deny that we have issues of corruption at the borders because it is there, and we are fighting it every day,” Motsoaledi said.