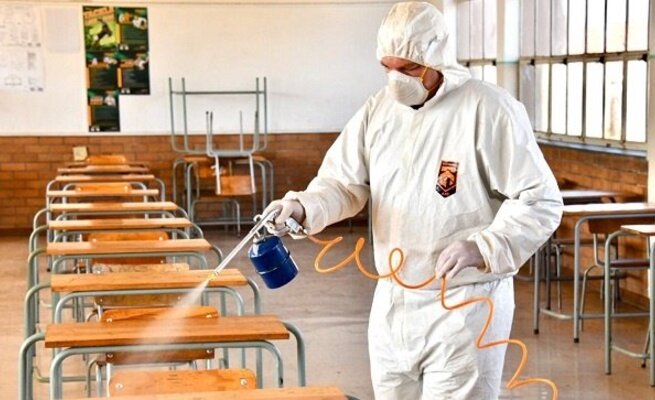 On Wednesday last week, a grade 12 pupil at Lephola Senior Secondary School tested positive for Covid-19 after displaying symptoms of the virus while at the school.

On the same day, the school in Welkom, Free State, sent letters to parents saying it would be closed for “cleaning of the entire school environment“, with no explanation.

The principal said he was releasing all pupils, adding that staff would “oversee the process of cleanliness happens smoothly.” No date of return was given.

On Monday afternoon, the matric pupil received her positive results but still parents were kept in the dark about what was happening.

A second letter written to parents advised them, among others, about school rules, uniform, absenteeism and the management of Covid-19 health protocols.

Yesterday, the department of education said the matric pupil succumbed to Covid-19 complications. They said 12 other pupils and a teacher from the matric pupil’s class had also tested positive.

According to the National Institute of Communicable Diseases, 401 hospital deaths of people aged 19 and younger were recorded between March last year and May this year.

A parent, who asked not to be named, said the school never informed them about Covid19 cases and simply chased away their children yesterday, telling them to listen to the radio for more information.

“No-one even informed us about the death of any learner. My daughter found out about it when she saw a schoolmate’s WhatsApp profile with a picture of the deceased girl written ‘rest in peace’.

“Since my daughter told me about the death, I have been very worried. Our children are not safe, nor are we because we do not know whether the children are bringing corona to us or not.”

Elizabeth Motloung, a grandmother of two children who are in grades 9 and 11 at the school, told Sowetan that she learnt about the death from pupils.

“They saw posts on Facebook and told me that a learner had died. There was no communication from the school about a coronavirus case,” she said.

Even a member of the school governing body complained about being in the dark on Covid-19 cases at the school, saying she only learnt about the death from one of the workers she asked after a meeting held on Tuesday.

Pupils from the school took to social media on Tuesday and yesterday asking whether they should go to school or not as it had not communicated anything with them following the death of the pupil.

The department said the school then encouraged other pupils to get tested.

Provincial education spokesperson Howard Ndaba said 100 pupils, 47 teachers and 14 non-teaching staff had tested positive for the virus over the past two weeks in the Free State.

Two teachers from different schools have since died.

Ndaba said the number of Covid-19 cases in the province was a reflection of what was happening in communities.

“We see an increase in Covid-19 cases just after the weekend and the learners import the virus to the school which has control systems enabling us to detect cases as early as possible,” Ndaba said.

Ndaba said they had not told parents because they needed to establish facts from the department of health, saying closing the school was a precautionary measure.

The Western Cape department of education recorded 91 new cases among pupils and 75 teacher and staff cases.

Spokesperson Bronagh Hammond said the head of department had written to schools informing them to prepare for the possibility of a third wave of infections hitting the province.

Department of basic education spokesperson Elijah Mhlanga said: “The cases come from communities and are picked up in schools because of the screening which we use to identify those who are infected.

“We urge parents to play their part and adhere to health protocols and help fight Covid19 infections at schools.”