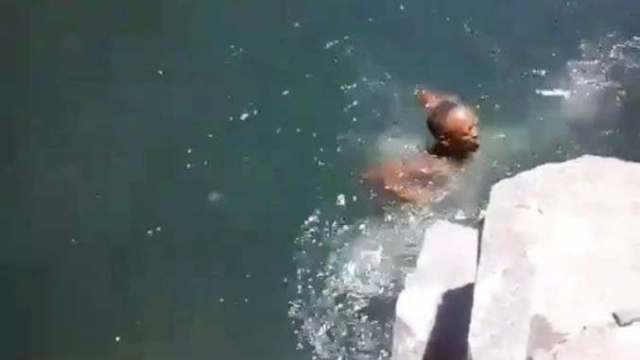 NKOYOYO QUARRY DAM DROWNING AS IT UNFOLDED (Not for sensitive viewers)

A disturbing video has emerged online showing a child recording his father jumping into a pool of water and subsequently, drowns

In a 2-minute video clip that is doing the rounds on social media, an unidentified young boy is recording his father as he jumps into the quarry dam.

As the video reaches the 1-minute mark, the visibly tired father is seen trying to get out of the dam as he attempts to find a grip on the rock to no avail. Meanwhile, the devastated son continuously calls his dad who eventually drowns.

The devastating incident took place at Nkoyoyo Quarry Dam in Swaziland. Below is a video clip of a son recording his dying father:

NKOYOYO QUARRY DAM DROWNING AS IT UNFOLDED (Not for sensitive viewers)

Heartbreaking Video Of A Man Taken By A Water Snake/Spirit In Front Of His Child. 😌 😢 😭 💔 pic.twitter.com/gtL29iIMzV

Social media users strongly believed the deceased was irresponsible and went on to bash him as others sympathized with him.

Below are some of the remarks :

Ras General
if quarry dams claim hundreds of lives yearly in the USA, what were we as Swatiland full of Demons superstitions of the most powerful evil water monsters……………………people pls avoid the waters specially the one from the holes of abandoned mines…………underground monsters do exist,even while mining,miners do get missing in many misterious ways……………remember Lille mine in SA , a container fell with 5 miners down to the bottom of the hell of the mine,seconds later the mine colapsed burring them forever….its been 5 years now still they cant be brought up becoz the getting them out was said to cost more than what the mine has made…….soooo that mine is now a tomb for them/// actually they were a sacrifice… fear the waters,fear the waters

Lwazi Kuhlase
May His soul rest in peace. What else can we say at this point in time. I pray that Jesus Christ to remove this data from the memory of the young one and comfort the whole family

Orchester Ntshalintshali
the water is too cold and that can paralyze you and you get tired easily. since it is a pretty deep dam, and due to the fact it looks like hard water (splashes are huge, its in a quarry so rock salts can dissolve in it hence making it hard), it takes a lot more energy to float on it, so he got tired a lot more easily. there also seems to be a little current s which prevented him from holding onto a rock he was trying to do. Rest in peace family. Avoid deep, shallow, cold dams even if you think you are a good swimmer. we all learnt to swim on a pool which has totally different dynamics and current working it. There is no evil meaning behind this. Rest in peace and take it down for the family, especially daughter's sake. She still has a lot of life ahead of her.

Samkeliso Dlamini
What happened is truly sad but I hope people can learn from this horrific incident. Drowning is very easy, it’s not as hard as people think it is, even for experienced swimmers and especially in quarries 60 seconds is all it takes. Quarries claim thousands of lives yearly in the United States. People have come up with all sorts of conspiracy theories…that the waters are haunted and all that which cannot be proven. What can be proven is that drowning is easy and that quarries are dangerous therefore people should avoid swimming in them.