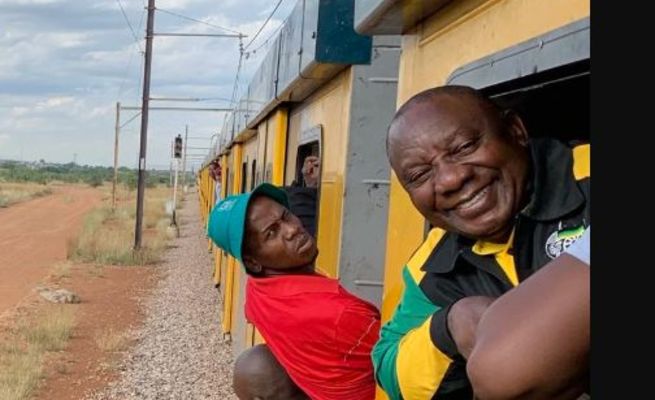 PRESIDENT Cyril Ramaphosa this week put his head on the block, telling South Africans the country would only have to bear with loadshedding at least until 2022 while pledging to create 800 000 jobs in the medium term.


R100 billion over the next three years to create the jobs through public and social employment.

He said the government would target the employment of

6 000 community health workers and nursing assistants as well as 60 000 jobs for labour-intensive maintenance and construction of municipal infrastructure and rural roads.

He said the government would invest R340bn in the short-term with R130bn earmarked for a number of projects that would see the creation of 190 000 housing units across the country.

Ramaphosa said the plan would lift economic growth by 3% per annum in the next 10 years.

“We aim to do this primarily through a major infrastructure programme and a large-scale employment stimulus, coupled with an intensive localisation drive and industrial expansion,” Ramaphosa said, adding that energy security would be realised within two years with additional supply accelerated to address electricity constraints.

He said the Infrastructure Fund would provide R100bn in catalytic finance over the next decade, leveraging as much as R1 trillion in new investment for strategic projects.

The plan has been roundly welcomed as the first step to resuscitating the struggling economy, but concerns were raised about how the plan will be funded without scaling back expenditure by an almost depleted fiscus.

Old Mutual chief economist Johann Els said the plan contained certain aspects that would help boost confidence and lift economic growth to better levels than those experienced over the last 5 to 10 years.

Els said he was, however, concerned to hear of the employment stimulus as it plans to expand public employment when the government should be cutting this back.

He said the government should be scaling back the expenditure cutbacks that were envisaged by the June Supplementary Budget.

“We should definitely be expanding on it.

“It is the absolute wrong approach to try and stimulate the economy through either extra expenditure or reducing expenditure cutbacks,” Els said.

“In summary, the speech was mostly as expected and lacked real reform measures.

“It lacked a true ‘whatever it takes’ approach needed to lift growth in the medium term to 2.5% plus on a sustainable basis.”

South Africa’s economy is reeling from the blow of the Covid19 pandemic which resulted in a 16.1% contraction and more than 2 million jobs lost between April and June.

Ramaphosa said the government wanted to unlock more than R1 trillion in infrastructure investment over the next 4 years, create and support work opportunities

“According to the modelling done by National Treasury, the implementation of this plan will raise growth to around 3% on average over the next 10 years,” he said. Ramaphosa reiterated a number of structural reforms, including the restructuring of

He said the government would finalise a long-term solution to Eskom’s R480bn debt burden which has been an albatross to the South African fiscus for decades.

“We will thus have difficulty raising funds in capital markets and will be competing for these funds with other emerging countries also seeking to rebuild their economies,” Coovadia said.

“The engagements on the fiscal crisis will also have to take tough decisions on reductions in government expenditure.”