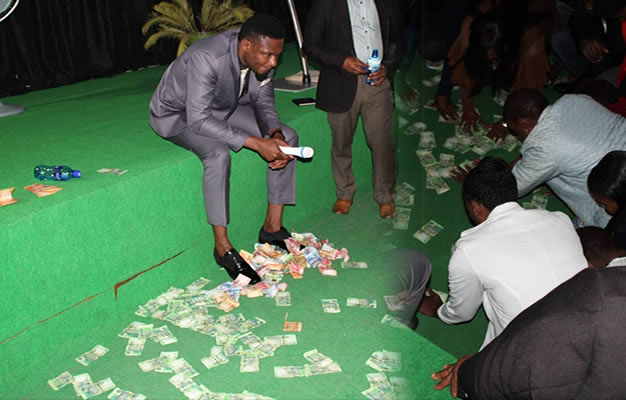 A South African Prophet popularly known as Seer 1 who was once based in Zambia shocked his church members when he vomited millions of money in different currencies.

This has been confirmed by himself on his Facebook Page. He claims that it was God who told him to empower his people by vomiting millions.

All church members, as many as they were scrambled to collect the money and no one of them went empty handed.

Shockingly, each of the note collected by church members started multiplying to the level that many church members became millionaires within 2 days. His church members are now ordering new expensive cars and they are praising the god of Seer 1 for that.

Seer 1 was chased out of Zambia because of his alleged satanic miracles.
.
This is what Seer 1 had to write concerning the money he vomited;.

“Its God who told me to empower his people”

A young boy visited the service and as the service was going on God moved me to Prophesy to him….

Those in the service last Sunday heard this testimony as I was preaching.
As I located the boy I began to Prophesy to him.

Hey boy, you are homeless!!!
He replied yes sir.

But the Lord has told me to bath you with money because 30 days from now you will become a millionaire.

Without wasting time I began to bath him with money of different currencies and God said, it’s enough, I stopped and he went back to his seat.

After the service he went and played Lotto and when the results came out, he won 13.000 million.

Within the space of few minutes God changed a street boy to a millionaire.

It’s not luck!
It’s an act of the prophet.

Even as I vomited your millions on Sunday, everyone that scrambled and picked up any of that money has instantly become a millionaire. Just watch and see.

And as am typing now, God has told me to raise 1000 millionaire, I don’t want anything from you just follow this instructions.

If I am a Prophet of God, 30 days from now millions’ mysterious millions will enter your hands.

Ignore if you don’t have faith.