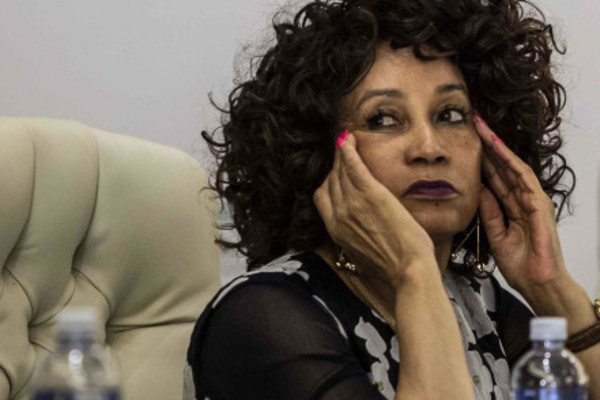 Tension between Human Settlements, Water and Sanitation Minister Lindiwe Sisulu and former members of the ministerial water services advisory group has escalated to the point where one claims he was arrested for threatening to kill her.

Lekgotla Dichoetlise, a former member of the National Rapid Response Task Team (NRRTT), has written a formal complaint to President Cyril Ramaphosa regarding what he has described as Sisulu’s “unbecoming and unlawful behaviour”.

Last month,  Dichoetlise and another former NRRTT member, Mogomotsi Mogodiri, had instructed their lawyers to lodge an urgent defamation application for R20 million against Sisulu.


In a move which Dichoetlise described as the minister “retaliating”, Sisulu recently opened countercases of corruption, defamation and intimidation against him in Pretoria. Because he resides in the Free State, officers from the Bultfontein Police Station in that province arrested him on Wednesday.

Dichoetlise said that he was detained for three hours, during which he was questioned and informed of Sisulu’s allegations against him.

“I suspect that [the police officers] were sent by the minister directly to intimidate me,” he said.

“They informed me that she had opened a countercase of defamation, as well as a case of intimidation against me, and said I was plotting to kill her,” said Dichoetlise.

According to him, the basis of the intimidation charges lay in a phone call he had made to the minister while still in his capacity as an NRRTT member.

“It was with regard to President Ramaphosa having indicated that he would be making an oversight visit to the Free State, during which – among other things – he would be looking into its problems surrounding water supply. As an NRRTT member there, I was obviously meant to be present. So I called the minister to make arrangements for welcoming the president and she indicated that she wouldn’t be there. Our conversation centred around

“The next thing, I was told that she alleged I had called and intimidated her, and had also threatened her life. There’s no truth to any of that.

“I suspect that pressure’s mounting on the minister and with a rumoured cabinet reshuffle on the cards and Sisulu likely to be axed herself, she’s now trying to be seen to be working against corruption, when she’s actually protecting the real criminals,” said Dichoetlise.

While not responding to direct questions from City Press, Sisulu’s communication team released a press statement on Thursday in which they said the minister was continuing to “uproot corruption in her department”, adding that this “critical work” was being done by “uprooting those who have built for themselves networks and syndicates that have longed used the department as their cash cow”.

The statement added that, in her quest to build the department’s delivery capacity and strengthen its financial resources, Sisulu remained “unfazed” and was “working closely with law enforcement in order to make sure that, one by one, all the members of these syndicates are arrested and prosecuted for stealing money meant for the poor”.

The statement went on to declare: “The minister is satisfied that one of the culprits, Lokgotla ‘Gado’ Dichoetlise, a rogue member who was expelled from the department, has been arrested by the police and we are confident that he will be able to share more names of the network that has been embezzling the department’s limited resources.”

Dichoetlise and other former NRRTT members, it added, “do not care about service delivery, do not care about the poor and will stop at nothing to abuse any space to loot and put their own nefarious interests first”.

Dichoetlise, it read, was not working alone and law enforcement agencies were on the heels of others.

In response to the arrest and subsequent allegations expressed by the minister’s communication team, Dichoetlise and Mogodiri’s legal representative, Advocate Hennie le Roux, said Dichoetlise was “chagrined by the reckless, malicious and defamatory statements attributed to Minister of Human Settlements, Water and Sanitation Lindiwe Sisulu contained in a media statement dated July 2 2020 that, once again, violates his rights to dignity and being presumed innocent unless proved otherwise by the courts”.

Le Roux said the statements amounted to a “rehashing” of “irresponsible utterances” that had led to Dichoetlise and Mogodiri hauling Sisulu to the high court on a defamation case.

“There are similar charges presently before the courts as part of a claim for financial compensation for damaging my clients’ good names and professional reputations. It is reckless at best and contemptuous of our justice system, at worst, for the minister to repeat such utterances.”

Le Roux said Sisulu was the one who was “guilty of going rogue and, for that matter, behaving like a constitutional delinquent, as she blatantly undermines legal processes and the oath of office she took”.

“Given the minister’s unbecoming and unlawful behaviour, my client has instructed me to lay a formal complaint with the presidency, Parliament and other relevant organs of state, to ensure that her conduct and [failure to uphold and respect] our country’s Constitution are attended to while ongoing legal avenues are pursued for redress,” said Le Roux.

In the email of formal complaint to the presidency, which has been seen by City Press, Dichoetlise questioned the manner in which Sisulu was “dealing with corruption in her department”.

“She is currently dealing with innocent people and she is using her ministerial powers to threaten us. Instead, Sisulu is protecting others at our expense,” it read.