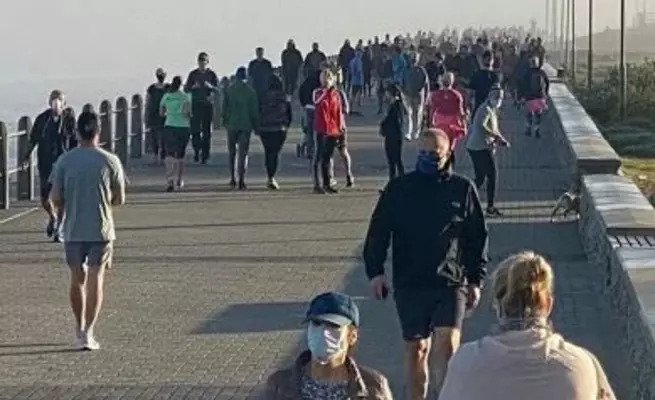 Many areas around the country are packed with people keen to get out.

While more than 100 000 people have been arrested by police since the declaration last month of the countrywide lockdown by President Cyril Ramaphosa, far more are set to face the wrath of the law if isolated cases of contravention of social distancing persist, according to national police spokesperson Brigadier Vishnu Naidoo.

Barely hours after South Africa this week moved into Level 4 of lockdown – easing earlier stringent measures in categories including physical training, travel and delivery by restaurants and fast-food outlets of cooked meals to customers – Johannesburg, Durban and Cape Town were among cities which had widespread incidents of people showing disregard for social distancing.

“I saw people walking at 9.20am. If you are walking around after 9am we have to pick you up and give you a lift. Not to your place, somewhere else,” Cele said, noting the “authority of the state” would be asserted.

Later at a roadblock, Cele warned President Cyril Ramaphosa had made it “very clear” the country could go back to a Level 5 lockdown if people did not comply with the new batch of regulations.

Social media was abuzz with people posting group photographs, walking in public parks and near beaches.

Despite the isolated contraventions, Naidoo thanked millions of South Africans he said contributed to a majority of people who adhered to social distancing.

“The over 100 000 people arrested since the start of the lockdown have been charged, appeared before court and some fined for breaking the law,” he said.

“If we have to arrest more, police will not hesitate to do so. People have no other choice but to comply with the law during lockdown, or face the consequences.

“Many people have made a huge sacrifice for the sake of ensuring that this disease does not spread, if one looks at the very high compliance levels.

“We cannot compromise that effort because of a few people who deserve no sympathy. Police are on high alert to ensure compliance.”

Constitutional law expert Advocate Paul Hoffman, who is director of Accountability Now, said the country could not return to Level 5 because of a few people who wanted “to negatively impact on much progress made during lockdown”.

“We expect law enforcement agencies to enforce the law by arresting and charging those who contravene the regulations.

“There is no reason for government to take us back to Level 5 because of a few people. “Should that happen, the question before the law would be whether a legal rationale exists for such a decision,” said Hoffman.

Despite what she described as “people suffering from cabin fever” due to the lockdown, Moodley said nobody had a right to break the law by not complying with the regulations.

“In areas like Delta Park, Emmarentia and Zoo Lake, we have received numerous reports of people walking in large numbers without adhering to social distancing – a disturbing development given the fact that we have just barely moved out of the stringent Level 5.

“Residents are advised that, as part of the Covid-19 Level 4 restrictions, all recreation spaces, including parks and the Zoo, are closed.

“We have been alerted about a number of people utilising parks, in contravention of the law.

“Residents are also reminded that they may walk or jog between 6am and 9am within a five kilometre radius of their homes – observing social distancing.

“The Covid-19 precautionary measures have been adopted by Joburg Parks and Zoo to safeguard people and animals.”