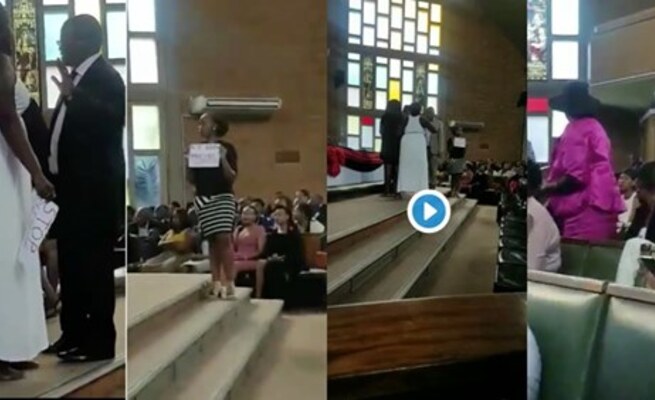 In a very strange incident, a South African preacher died in church whilst in the middle of a sermon. celebgossip.co.za observed in a video circulating on social media that Reverend Bassie Jackals died whilst giving a vigorous sermon on Sunday. Online publication,,Daily Sun has also confirmed the development and revealed that the incident occurred at African Methodist Episcopal Church in Kuruman, Northern Cape.

In the very shocking video footage (see below) Reverend Bassie energetically gives his congregant’s a powerful sermon unaware that it would be his last. After giving the vigorous sermon, Reverend Bassie momentarily sits on a chair before collapsing. After the Reverend collapses congregants, under the assumption that the Reverend is under the influence of the spirit clap their hands until after a moments later.

Social media users sent their condolences to Reverend Jackals’ family. They said he was blessed because the Bible said:

“Blessed are the dead who die in the Lord.”

One social media user, only identified as Gugu said:
“When he sat, it was like he was acting the way people should sit until the Lord comes, unfortunately, the Lord came for him while resting.”

Thuli chimed in and said:
“At least he died doing what he loves. May his soul rest in peace.”
Rehaan said: “Rest in peace brother. Anyone doing God’s work the right way shall be blessed.”

When called to shed more light about the unfortunate incident, Reverend Dimpho Gaobepe said they were not ready to speak about the incident.

We are still discussing a way forward. We don’t even know how the video got on social media.
That alone has taken its toll on the family,