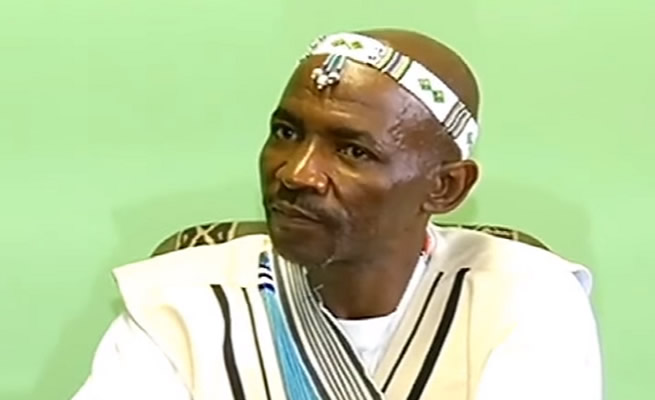 His wife wanted him to be airlifted and not be taken by an ambulance, fearing the 2km gravel road from his home at Nqadu Great Place to the tar road would be too bumpy for him because he had two fractured ribs from a recent car accident.

However, health officials told her that the helicopter could not fly in such poor weather.

Yesterday, Eastern Cape health department spokesperson Judy Mpetsheni confirmed the king could not be airlifted due to bad weather conditions.

Sources within the Eastern Cape health department and the royal house told the Sunday Times that the king’s wife, Queen Simanye, called emergency services at about 10am on Wednesday but was concerned about allowing him to be transported by road.

Mpetsheni said the health department sent a doctor and two nurses from nearby Willowvale to assess the king’s condition.

“This is the first step the department took even before an ambulance was dispatched … When they were done they called for immediate emergency vehicles,” she said.

The king was eventually taken to the Nelson Mandela Academic Hospital in Mthatha, about 120km away, in an ambulance that picked him up just before 4pm.

He was received at the hospital by two senior specialists and three medical officers, who placed him on a drip and admitted him to a private ward. He died less than 12 hours later.

The Sunday Times has learnt that when he arrived at the hospital, Sigcawu was severely dehydrated and was suffering from kidney failure.

The king had a history of kidney problems and had previously been in and out of a number of hospitals around SA.

His uncle and family spokesperson Xhanti Sigcawu confirmed his nephew had been sick for some time and that he had experienced vomiting and diarrhoea before his hospitalisation.

The Sunday Times has also learnt that the traffic accident in which he was involved, three weeks before his death, is not believed to have precipitated his death.

Sigcawu allegedly drove through a red traffic light in Mthatha and was involved in a collision with another car.

He did not go to hospital at the time but later, during a business trip to Cape Town, he complained of chest pain and was admitted to hospital there.

He was discharged and travelled back to the Eastern Cape, where he was admitted to St Dominic’s Hospital in East London.

Doctors there found he had two fractured

ribs, probably as a result of the collision.

The vomiting and diarrhoea he experienced in the days leading up to hospitalisation on Wednesday are said to have left him severely dehydrated.

“Everything he was taking in was coming back up in a matter of minutes,” a source close to the family said.

Ntshinga Magafela, 62, who lives in the Nqadu area, remembers Sigcawu as an 11year-old boy who was whisked away to Cofimvaba to be protected from potential enemies.

“You will remember, a person who has been identified to be a future king is kept away from his home village for his own safety,” Magafela said.

“So his father Xolilizwe took him to Cofimvaba. He only came back when his father’s illness took a turn for the worse and he was getting ready to take over.

“Even when he went for circumcision, no-one in the area knew … They only learnt that he was an initiate when his father started preparing for his homecoming.”

Magafela said Sigcawu had been a community-builder and a king who loved his nation. Sigcawu’s sister Sheila told the Sunday Times of his love for education. “He had adopted four schools in the area and renamed all of them after his grandparents and his father.”

Subjects of the late king paid tribute to him. One of them, Thembela Libela, a building worker, said it was thanks to Sigcawu that young people in the area had received training that enabled them to get jobs.

“Currently I am working and being trained in bricklaying, plastering and painting because of our king,” Libela said.

“Two weeks ago he gave me his own tractor and didn’t charge me a cent. All he wanted was for me to plough my fields. He always preached that we need to be self-sufficient,” Majo said.

Sigcawu’s path to the throne was not plain sailing — in May 2010, amid preparations for his coronation, his aunt, princess Nomaxhosa Sigcawu, claimed that she was the rightful successor and should be crowned instead.

She claimed she had been bypassed because she was a woman, and that she had been ignored and sidelined over the years by clan elders.

Her claim to the throne led to a five-year delay before Sigcawu was finally crowned.

The spokesperson for the department of co-operative governance & traditional affairs (Cogta), Lungi Mtshali, said no decision had yet been taken as to what category of state funeral Sigcawu would get.

“We are still in the process to develop a handbook for kings and traditional leaders in general. That process has not been finalised as yet. We now are waiting for President Cyril Ramaphosa to make announcement,” Mtshali said.

Cogta deputy minister Obed Bapela said during a visit to Nqadu Great Place that the government did not have a policy determining what type of funeral kings and traditional leaders should get.

“That policy is still being developed and when it is ready will be presented to cabinet. However, this funeral will lay a foundation for government to have policy,” Bapela said.

Xhanti Sigcawu told the Sunday Times that the family had asked Ramaphosa to accord the highest possible status to Sigcawu’s funeral, which would take place at Nqadu Great Place on November 29.

He said there would be an announcement tomorrow on who would act as king or regent until a permanent successor was named.

Sigcawu is survived by four wives and eight children.

Mwelo Nokonyane, chair of the Eastern Cape House of Traditional Leaders, said there should be no question about the status of the funeral. “All kings must be afforded the same funeral category bestowed on presidents and former presidents.”