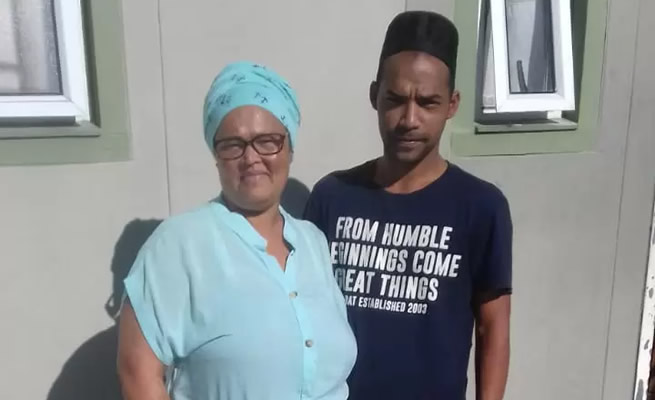 A desperate and seemingly sex-starved Delft woman has turned to newspapers to win back her estranged husband who she says divorced her “because he is gay”.

Shameema Rafferty Louw, 51, wants her 28-year-old husband to come home so they can repair their marriage.

Shameema met her husband, Zainoedien Louw, on Facebook last year and they were married a few months later.

But she says Zainoedien suddenly walked out a month ago, after seven months of marriage, leaving her to care alone for her quadriplegic cousin and her 13-year-old son.

She has three other grown-up children and says after chatting on Facebook, she agreed to meet Zainoedien at her home in N2 Gateway in November last year where it was “love at first sight”.

The unemployed couple got married on 28 April.

She explains: “He does not have any children and when I went to meet his family, they paid for the wedding.

“We never fight and I do everything for him to be happy.

“I am a good wife to him and our relationship is strong because I know he loves me. I want him to come home.”

Shameema says he called her out of the blue to tell her to collect talaq forms from his mother in Bonteheuwel last month, after he apparently went the Muslim Judicial Council on his own to request a divorce.

She says she got a skrik when her mother-in-law told her that her husband was homosexual.

“His mother told me he is gay. She caught him once having sex with someone I only know as his friend. I asked him about it and he said to me he is not gay.

“He says he is not unhappy with me, but why does he not come home?

“He is now living with a couple staying near his mother,” she says.

Shameema says she does not care if her husband is gay as she can “change him”.

“I have begged and I am willing to do anything if he will just come home to me. He just needs to tell me what I must do,” the desperate woman says.

The Daily Voice called Zainoedien and when asked if he is gay as his wife claimed, he said: “What? It is nobody’s business. That woman is mad.

“We have a talaq and I have the proof.”

When asked for proof of the talaq, he hung up the phone.

Shameema says all she has is a document for an appointment at the MJC.

She says she will fight for her husband: “We can fix this. He must just give me a chance.”