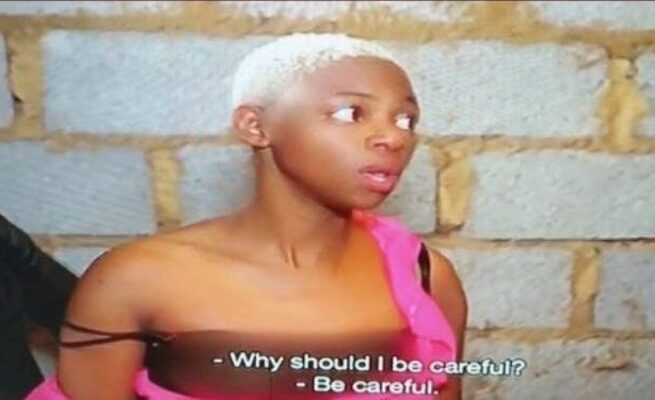 Jub Jub's Uyajola 9/9, has has been accused for faking scenes by a woman who claims was paid to act during one of their episodes.

This after a woman known by Uyajola9/9 viewers as Blondie, real name Nothando Gumede says she is now in trouble with her family for appearing on TV fighting for a man.

According to Blondie she thought she was acting just like other actresses when she was given a script and told the actions she was supposed to do during production.

Blondie claims she was paid R1,000 not to ever disclose her role in the episode to the public.

The episode in question was shot in Ntinyane at Mbumbulu and she says the couple she confronted in have no problems in their relationship and they too were acting.

“Where the shooting took place is the home of the guy that we were supposed to fight for, he stays with his girlfriend. They paid me R1,000 and this couple was paid R2,000 for them not to talk. Even the condoms which were there I’m the one who put them as I was told, for the episode to look real,” Blondie said.

Blondie reveals she feels cheated by the producers of Uyajola9/9 as she was even forced to delete her Facebook account so that viewers would not be able to trace and contact her. She says the trouble is not worth the money she was given.

celebgossip.co.za has learnt that Nothando sent an SMS to Moja Love spokesperson, Lindiwe Mbonambi but she hasn’t received a response.