Home Entertainment Praise poet Jessica Mbangeni on what she had to go through to... 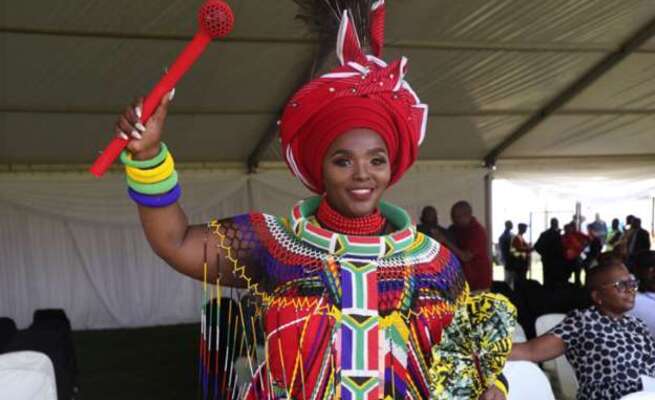 Jessica Mbangeni is a woman of her own words she makes waves in every place she visits, she is a person of style, in beatiful clothes and quickly becomes a centre of attraction when she speaks.

She is not worried at all, even after having had courted controversy for her constant showing up at highprofile funerals.

“I have the spirit of creativity. It’s all about allowing yourself your own space of greatness,” Jessica said. “It enhances everything around you. Even if I try not to wear something wow, I can’t.”

She knows how to attract attention. At the 2019 SAMAs she walked the red carpet wearing a life-size lion skin as if she were a mascot. The year before that she had peacock feathers attached to her turquoise dress.

Her most recent apparel had South Africans talking. She showed up at Dr Richard Maponya’s funeral in a priesthood outfit, shoving off people. “I don’t have to explain myself to those people,” she said.

In a video circulated on social media, a SAPS officer can be seen ordering her not to be in the close quarters of leaders officiating a the gravesite, but she remained adamant.

“Someone was instructed that there was a powerful woman there, so they decided to torment and devastate that woman. I’m a family friend of the Maponyas,” she said. The treatment made her appear as if she imposing herself.

She just wanted to pay her last respects to the iconic businessman and support his family, like she’s done with many other icons she’s associated with.

As for those who frowned upon her wearing an outfit worn by ordained priests and bishops, she said ‘they can think whatever they want adding that she was a bishop-elect and will be ordained as one on 24 May.

“I don’t want to say much about it. All I can say is, it’s a church that looks after the great leaders of this country.”

Jessica added that she’s gone through much worse than social media backlash. “I just laugh it all off, mntase. Now I’m being trained to be a bishop, I have a deeper understanding of who I am when I usher in a person who’s no more.

“I know I’m carrying a spirit, something that’s very powerful and has to reach the place it has to reach. It’s not about a paycheck for me; I didn’t know there was money in this. I did it because I’d be included in people’s wills,” she said, referring to the fact that people have asked in their wills for her to attend their funerals.

It’s been 20 years since she last came to Johannesburg from the Eastern Cape, with a passion for a career in the music industry. “The streets of Joburg aren’t paved with gold,” she said.

With no solid plan she held on to the words of a church leader who once told her, “Johannesburg – that’s where the turning point will be.”

She said she was not worried leaving her home in Nqamakwe. “It was difficult,” she added. She attracts friends everywhere she went. “They’d think I was there just to visit but I’d end up staying a night or few nights with them because I had nowhere to go.

“I had this little purse that held my underwear, my towel, my lemon lite cream and socks. I lived in the little black purse,” Jessica says. She went to every audition she could, willing to do whatever it took to get into the industry. “I thought the industry would welcome me with open arms," she said.

As a musician she needed to show her prowess. “I’d sing and at the end of the song, talk. People would say it seems I couldn’t sustain the song as I didn’t sing it all the way through. I felt like a failure. I started listening to people like Rebecca Malope,” she added.

Jessica at one time had to work as a domestic worker two weeks before she was about to give birth to her eldest son. She struggled after the birth and a nurse advised her to give the baby up for adoption. She refused – and going back home wasn’t an option.

“I knew back home I had a wall-to-wall wardrobe and a double bed. I could leave, but my life had a greater purpose. I’m raising kings in them, future leaders who need to know how to serve so they can appreciate when things come their way,” she said.

In 2002 Jessica joined the internationally acclaimed Soweto Gospel Choir and travelled the world with them for three years.

A few years ago she opted to go on her own. “People would ask, why are you leaving? But I knew it was time to fulfil my purpose. It was so embarrassing travelling and hearing people tell you about your culture and your continent – things I didn’t know about myself,” Jessica said.

She dropped her debut album, Igoli seven years ago, followed by Busisiwe Tribute to African Heroines in 2014 and a live recording and DVD of Igoli in 2015, all under her own record label, KwaNtu Entertainment Designs.

“I wasn’t going to be where I needed to be if I didn’t read and associate with African writers and other powerful women. The power of association – knowing which women to surround myself with – lifted me up,” she said.

In 2018, she was featured on afro-pop singer Vusi’s hit song, Asiphelelanga. “This song’s put a stamp on what my voice stands for. I’ve occupied mainstream terrain,” she said.

THE POWER OF CONFIDENCE

She said her journey is unfolding beautifully and was happy. “I’m a brand now,” added the owner of KwaNtu Afrocentric Designs based in Jozi’s Oriental Plaza.

“Having a good background enhanced a sense of confidence from a very early age. We’re born confident, but we’re shaped by a society that makes us think otherwise. I was raised by a mother and grandmothers who were solid," she said adding that no one should compromise her potential. “In my life I’ve always thought beyond the horizon, even though I grew up in a village.

“We have that voice inside of us and that voice will never leave. The voice of truth will always intimidate the space you’re in,” she said.