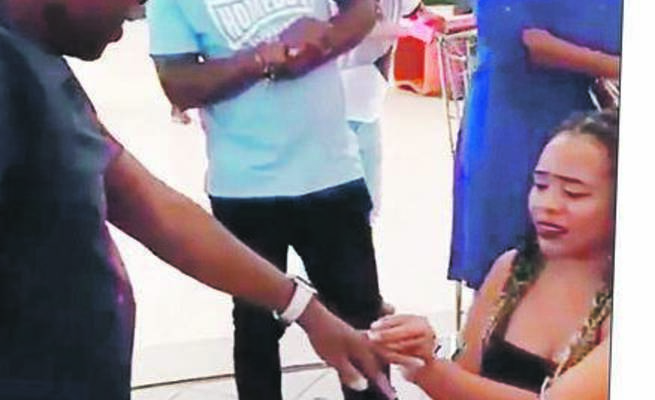 THE video shows shoppers watching in disbelief as the woman, who goes down on her knees, seems to be proposing marriage.

“Yes!” shouts the man and reaches out to her, helping the crying woman into his arms.

People are seen clapping and shouting.

Thabang Mnisi (36) from Orange Farm, south of Joburg, told Daily Sun he was shocked and excited at the same time.

“We were in a queue buying lunch at Uyethu Mall and my girlfriend Sikilelo Maki just went on her knees and asked me to marry her.”

Thabang said he and Sikilelo (30) often make prank videos. “I thought it was a joke until I saw her crying and realised she was serious.”

They’ve been dating for two months.

“I love her and now she’s asked for my hand in marriage. I like the idea.”

A shy Sikilelo told Daily Sun she couldn’t wait for Thabang to pop the question.

People on social media applauded her for getting what she wanted.

Fezile Makhathini said: “This is very beautiful. I wouldn’t mind engaging my boyfriend”

Sbuda Malinga said: “Yes! At last it has happened. Lobola is coming.”

Nehee Leboo said: “I don’t expect that. Normally it’s done by the man.”

Thee Lunaj said: “The only time I’ll get down on my knees is to fasten my shoe laces or dance Guqa Ngamadolo.”