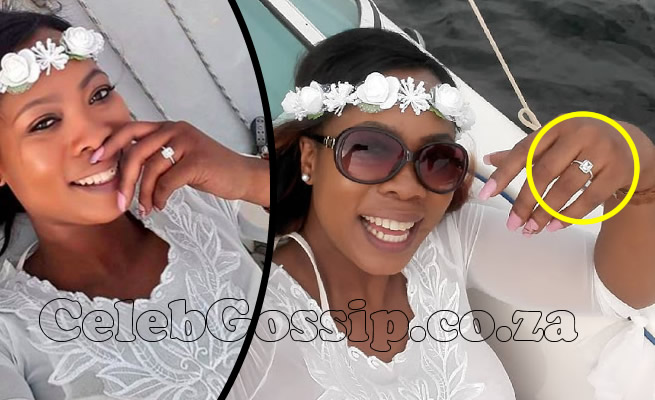 As usual, she took to social media to share the awesome news and social media erupted in celebration. Skolopad also told TshisaLIVE how the businessman proposed.

"It was just perfect: the right question coming from the right man at the right time. I didn't even wait for him to finish the question, I just said yes. What happened was I was with him last week, so he said he'll arrange for me and my friends to have a weekend away at Harties. But when we got to Pretoria, he insisted on taking us there himself and on Saturday morning, he asked me to marry him and put a ring on my finger."

Just a couple of month ago Skolopad was talking about being proudly single and not willing to give up her freedom. Which is why after the initial influx of congratulatory messages, Skolopad's timeline was flooded with people asking her if it's a publicity stunt.


You can't blame them – Mzansi has been through the most with these celebs.

So we asked her if it was all a publicity stunt…

"No. It is not a publicity stunt at all. It's public in that the ring will show that I am off the market. But it isn't for media to give me attention. Those that think so will eat their words next year."

Skolopad said she wasn't willing to share his name, but she had been dating the man for six months. She said the man flies her to Pretoria or Joburg when he wants to see her.

She said she's been ready for his ring from the second month and it was genuine love.

Yesterday morning, CelebGossip.co.za was the first tabloid to reveal that Skolopad's new boyfriend is a married man, and true to our revelations, she has confirmed the news.

"We've been dating for six months. And despite what people might think, I don't think it's too soon. In fact, I have been ready since May. We met in Pretoria and he fell in love with Nonhlanhla, not Skolopad, which made me very happy. I'm in love with him. He's a Swati man and he's married, so I am going to be wife number two. I've said before that I am willing to be a second wife, so it's a dream come true."

When asked if she's met the first wife, Skolopad said no and her hubby-to-be also hasn't been introduced to her family officially.

However, Skolopad said she's confident that all the necessary introductions will be done and although she hasn't met his first wife, she was sure that the first wife knew of her existence.

It got a tad trickier as she continued…

"He hasn't met my daughter or my family, but I told my mother about him. The thing is we've only met up, like we've seen each other about six times. He plans on paying lobola soon and next year we'll begin proper wedding plans."