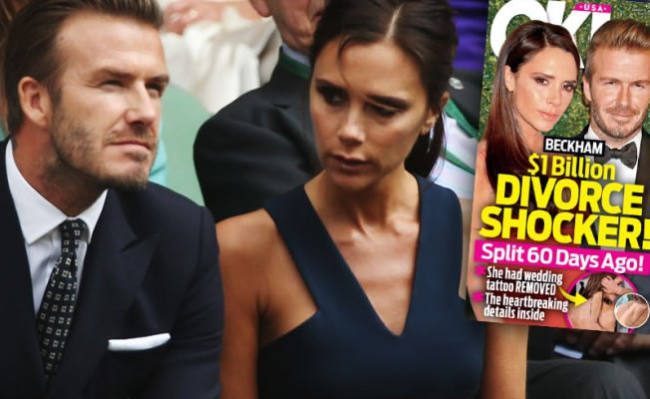 Everybody has spent months wondering whether Britain’s most iconic couple, Victoria and David Beckham, had broken up.

It’s been an emotional rollercoaster to say the least and we were ready to give up on love.

But now we can officially keep calm and carry on, as Victoria has just totally shunned those rumours in her latest Vogue interview, celebrating 10 years of her brand.

The fashion designer said she and husband David have learned to ignore the ‘nonsense’ written about their marriage and people have been gossiping about them since the day they got together.

She told British Vogue: “We both realise that we are stronger together than we are as individuals.

“Would either of us be in the position that we are in now had we not met and been together all those years ago?

“It’s all about the family unit. We are much stronger the six of us than we would be if we were individuals. We respect that family bond and that is key.”

Victoria also discusses her fashion line, her family and finding success as a total underdog in the industry.

“I was bullied,” she said. “I wasn’t that clever. Everything you wanted to be – that popular girl – I was the complete other end of the scale.”

Vogue also released a hilarious skit starring Victoria trying to pitch an idea for a shoot to a very baffled Edward Enninful, and best of all? It contains a LOT of Spice Girls references.

Why do I always have problems with microphones?? 🎤🎤 @isaacjlock @britishvogue #VbSince08

Rumours of the split resurfaced after her Vogue cover featuring her family was revealed – and David was absent from the main photo.

However, there turned out to be a very simple explanation, as Edward Enninful tweeted that the Posh/Becks cover we were expecting will be on October’s subscriber edition.

The pair have been #couplegoals since day one, donning many a matching outfit, and now we can rest easy knowing our fashion inspo isn’t going anywhere…