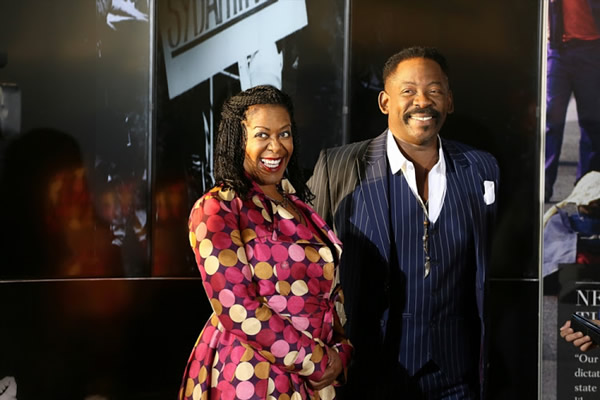 Tselane Tambo – daughter of former ANC president Oliver Tambo – has accused the ANC of “dumping” her at her most vulnerable, leaving her to fend for herself, sick and alone.

Tambo (56), an actress, suffered a stroke in 2014. She can no longer use her left arm, has slurred speech and walks with the aid of a walking stick.

She suffered the stroke shortly after making tabloid headlines for having allegedly been “kicked out” of a luxury guest house in Sandton after failing to pay a hefty R157 000 bill for her stay.

Tambo spoke to City Press this week in the sparsely furnished two-bedroom flat she said she was “dumped in” five weeks ago by members of the ANC. It’s located in a new development in Fourways. Asked whether she had gone to her older brother Dali for help, she broke down and said: “I don’t have a brother.”

But he insists he has “supported her all her adult life”. For most of this year, Tselane has been living out of two suitcases at the mercy of a dutiful group of friends, moving between various guest houses; a KwaZulu-Natal sangoma’s compound, where she tried to find a cure for her paralysis; and Simon’s Town in Cape Town, where she was happiest.

“A friend was supporting me financially until she could no longer do so. I had no source of income. I moved around Cape Town for a bit until another friend said I should come back to Johannesburg, and convinced me to ask the ANC for help. I had never done that before, but I had no choice,” said Tambo.

She said she spoke to ANC chairperson Gwede Mantashe, who told her he would ask the party’s treasurer-general Paul Mashatile to help her find and pay for accommodation. Tambo claims that, after a few weeks, her accommodation at a Sandton guest house went unpaid, despite assurances from Mantashe and Mashatile, and she ended up having to move to Alexandra township to stay with a cousin.

But her cousin was also overburdened, living in a cramped three-bedroom house with a dozen children.

“She insisted we go to Luthuli House to get help for me. We spoke to the general manager, who then contacted the guys Paul assigned to help me,” she said.

“They said to me that the problem is that no one wants to help me because there are rumours I was in rehab and that I spent R10 million from my inheritance money. What inheritance money? Trust me, if I had had R10 million, I’d be comfortable for the rest of my life.”

Five weeks ago, Tambo was brought to the flat where she now stays – an area that suffers frequent power and water outages, and has no accessible public transport.

“I told them it’s too far from my life. I may not have a lot of it left, but I still have a bit of it. It’s a desert out here; it costs me a lot of money trying to get to church in Sandton,” she said.

“When I was brought in, I asked to buy my own groceries, but the men who brought me rushed to the store and got me tons of baked beans, huge bags of sugar and other food I don’t eat because of my health.”

She also complained about the noise levels at the complex, which is inhabited mainly by young professionals and couples, over weekends, and that she did not feel safe there because she was not given the key to her front door. She claimed to only have the key to the burglar gate.

“No one [from the ANC] called to find out if I’m okay or not, if the food had run out or not; and I don’t have any medication for my high blood pressure and other medications I take. They literally dumped me here. At first I was upset and cried, but then I thought: ‘No, darn it, I’m a person.’”

And then, after speaking to City Press, she claimed that the men who moved her to the Fourways apartment block began threatening her.

“Intimidation on top of everything else! They called to complain that Paul [Mashatile] told them off. They threatened to move me to a shack in Alex. Is this the new spirit of the ANC? Torture and bullying? Really?” she said.

A source close to the story who helped move her to Fourways, said: “Tselane is not telling the truth”.

“We owe a B&B in Sandton R60 000 and have tried to help her. Even comrade [Mzwandile] Masina gave her a house on the East Rand and she didn’t want to go. She threatened to go to the EFF if we didn’t help her. For Gwede, it’s even worse; Tselane manipulated him and it’s not right. She has not been dumped at all.”

But Tambo insists she deserves better treatment. “Some will say: ‘Oh, but you’re not Oliver Tambo.’ I’m the first person to tell you that. But I’m his child. I’m not lazy – I really can’t walk or talk properly; I’m not well. I could use help sometimes, with stupid things. This morning, I tried to open a pack of bacon and it was a herculean task.

“Life is not easy. I haven’t had a key for the door and when I ask, no one knows where it is.”

Mantashe confirmed that Tambo had contacted him and he said he had tried to help her.

“She did talk to me and at the time, I did try to help. But it is very difficult to sustain that out of your own pocket.”

Mashatile said he organised a few people to help her find a place and set her up, but denied that they had “dumped” her in the flat.

“At the end of the day, it’s not a shack. As the ANC, we will help where we can, but we don’t have a budget for a Sandton apartment. I wasn’t aware she didn’t have food or medication, and we will look into that and help where we can,” he said.

Tambo wept when asked if she had sought help from her brother, Dali. “I don’t have a brother. It’s sad but true. Please let’s not talk about it,” she said.

However, Dali says he sends her money every month. “Over the last two years I’ve spent well over R1 million on her. I’ve done what I can. I have four kids, and one is autistic and I am a small businessman. I really do believe the ANC has also done their best. Perhaps her expectations are beyond what they can do,” he said yesterday.

“A stroke is an unfortunate thing to happen to anyone and it has serious impacts on a person physiologically and mentally.”

However, a sobbing Tambo said: “This is the story of my life; I think I have a right to tell it. I don’t want to be treated like I’m nothing. I’m not nothing – I’m a person. I’m a progeny of a great man and I at least deserve to have a key to my door. The attitude is: ‘Well, no one wants to help you, so be grateful.’ I am grateful, but you know what? It’s increasingly not seeming like help.”