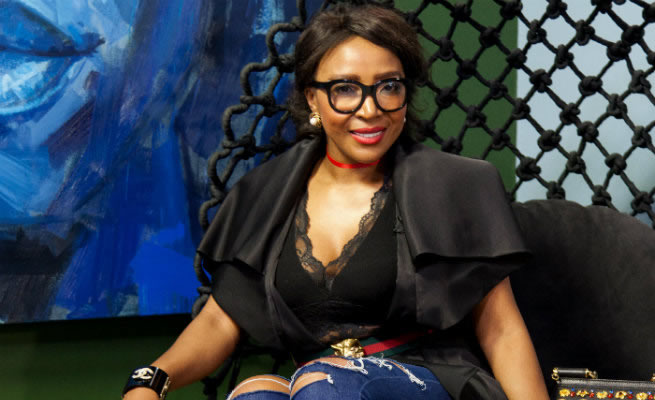 Socialite Uyanda Mbuli is fuming! This comes as a woman has allegedly been spreading nasty rumours about the flamboyant star. And now Uyanda has decided to sharpen her claws and opened a case of crimen injuria against the Jozi woman named S Ramushu at the Midrand cop shop this month.

According to the case file, the woman accused Uyanda of allegedly milking a blesser from Dubai. Uyanda (39), who made a name for herself as Nomonde on the SABC1 drama Tshisa, was angered by this allegation.

According to police information, the alleged incident happened at the popular beauty spa, Florence Essence, at Grayston Mews in Sandton, Jozi. In Uyanda’s police statement, Ramushu first asked to take a picture with her inside the spa. But things took an unpleasant turn when she allegedly labelled Uyanda a parasite, who had accumulated her wealth using someone else’s husband.

Uyanda’s affidavit mentions another three unidentified women, who also ganged up on her, using foul language. Reads the statement, in part: “The complainant (Uyanda) alleged she arrived at Florence Essence where she found three women, one of whom is named Ms Ramushu. Ms Ramushu greeted her politely and asked to take a picture with Uyanda, she then accused her of gaining wealth from a blesser in Dubai.”

Uyanda told cops the insults continued on her cellphone. She said Ramushu threatened to spread the allegations on social media – which she later did do.

“While at home, she received Facebook screenshots taken with Ms Ramushu’s phone, accusing her of being a man snatcher,” the statement read.

Police spokeswoman Matome Tlamela confirmed that the case was opened, saying: “No arrests have been made and a warning statement was obtained from the accused. The docket is ready for a decision to prosecute.”

Uyanda was not interested in answering any of our questions. She threatened to sue Sunday Sun.

“It’s unconstitutional for you to gain access to and make public confidential affidavits and court papers for purposes of selling the newspaper and create a public opinion on a serious character assassination matter, which has not officially been before court. How did you gain access to the confidential court file? If you choose to make public the ‘statements’ which are stated in the court file to be untrue, malicious and of a character assassination nature, then you will be an accomplice in this case of defamation of my character, and I will have to file a joinder application on the defamation aspect,” she claimed.