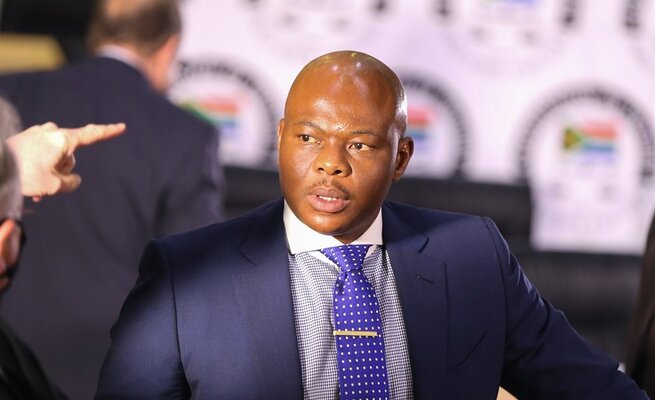 There will be no wedding bells for Johannesburg’s most notorious bachelor, Edwin Sodi, at the end of this month.

Social media was abuzz this week after an invitation to a traditional wedding for Sodi and his on again, off again girlfriend Karen Zulu did the rounds.

However, shortly afterwards, the embattled Casanova took to WhatsApp to inform close family and friends that the invitation was in fact fake.

“Someone with a mental issue decided to create a wedding invitation and post it on social media. This is beyond sick!” he wrote.

When contacted for comment yesterday, Sodi repeated that he was not planning to tie the knot – at least, not right now.

He said:
I’m not getting married. I will one day, but this wedding is a fake story. I’m trying to get to the bottom of who posted that phoney invitation. Some people have their own intentions, but it’s just crazy that someone would go to this extent. It’s a nonexistent story.

Sodi added that he was tracing the person who had leaked his address.

“Karen and I are fine. We’re okay. It’s unfortunate that this person shared information about where I live. I don’t mind humour and [harmless] practical jokes, but when it goes as far as sharing someone’s residential address, it becomes dangerous.

“I have to ask myself what the real intention of that was, because now I’m exposed. Everyone knows where I live and I think it’s important to know who was behind it,” he said.

A close family friend said the businessperson would in any case be unable to plan a wedding, as he was still legally married to his estranged wife Nthateng Lerata.

“How can you get married while you’re still married to someone else? They’d need permission from his first wife if they wanted to go the polygamous route – and Nthateng would never give them that,” said the friend.

The legality of Lerata and Sodi’s marriage is evidenced by court documents that were shared at the Randburg Magistrates’ Court, where the two are engaged in an ongoing assault case that was opened by Lerata in March.

Sodi allegedly assaulted her and businessperson Faizak Motlekar, who were both at Motlekar’s home when Sodi arrived there. He allegedly pointed the firearm at Motlekar and pulled the trigger, but the weapon jammed. Sodi then fled the scene.

n the court document related to Lerata’s statement to the police on the day she and Motlekar were allegedly assaulted, she began by describing Sodi as her estranged husband who had not lived with her and their children in their matrimonial home for six years.

The family friend said Lerata and Sodi had not filed for divorce, but were both aware of each other’s love lives and were unable to let one another move on with other partners.

The friend said:
Nthateng would never, ever give Sodi permission to marry anyone else. She’d always put herself in a position to spite Edwin. So there’s absolutely no way any wedding [to Zulu] could proceed unless Edwin wanted to force it.

Sodi and Zulu have been dating on and off for two years. The Blackhead Consulting CEO reportedly sent a delegation to Zulu’s family in KwaZulu-Natal to pay lobola for her.

Throughout their relationship, Sodi has reportedly dated other women.