A media report claimed that Enhle Mbali’s request of R131,000 in monthly maintenance was rejected by a court.

The Sunday World reported that the model and actress lost her court bid for Black Coffee to pay her more than R131,000 in monthly maintenance.

The court ruled she could only get R15,000 a month for spousal maintenance and R50,000 in child support.

Enhle let it be known on Instagram that the report was a ‘”lie” but that her court application was for Black Coffee to pay maintenance. 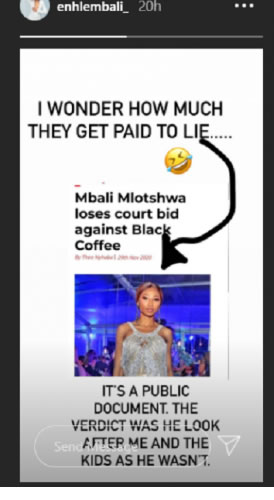 “We have always had faith in the legal and family courts processes. We are grateful that both parties we were able to reach an amicable resolution for the children. They will continue to co-parent lovingly and respectfully to each other and the benefit of the children.”

The couple parted ways late in 2019, with Enhle alleging that Black Coffee was unfaithful during their marriage. They have two children together, and Black Coffee has two children from a previous relationship.