Things appear to be messy for Katlego Maboe as videos emerged of him on social media confessing to cheating on his wife.

TV presenter and singer-songwriter Katlego Maboe found himself having to explain his actions again after going all the way with another woman, who is apparently married.

In video footage that has been doing the rounds on social media, a visibly embarrassed Maboe admits to having slept with another woman.

“I demand the f****n truth. So you’re going to tell me, or you’re going to f****n leave as I said. It’s as simple as that. You know where your priorities lie, you f****n decide. Yes I gave you an ultimatum, it’s a shit one. You f****n ruined my life, so now you decide,” his partner tells Maboe as she gives him an ultimatum – to tell the truth or never see his child again.

According to his confession, the deed happened once sometime this year at a hotel after a night out.

Wait isnt this Katlego? How old is this video? Is this from a movie or its real? #katlegomaboe #safa #Hawksarrests pic.twitter.com/eiXGZlGCnz

Don't be like Katlego. Sms OUT, if you no longer want your partner. #KatlegoMaboe #BuyaKimi pic.twitter.com/Vv8o1nkHum

In the video he confesses to sleeping with someone else at a hotel during their marriage.

This is not Maboe’s first night out that ended in a scandal.

Speaking to Gareth Cliff in 2016, Maboe opened up about a crazy night he had that ended in him kissing a “someone he was not meant to be kissing” at the time, refusing to be drawn into naming the woman.

“It’s a simple thing where I was kissing someone I wasn’t meant to be kissing at the time,” he said, adding that he was not sure if the person was someone’s wife or girlfriend.

“What happened is‚ we went to the horse races‚ and we were all together as a group of friends‚ and we had a couple of drinks and it was great. Later on in the night‚ there was a vibe. You know when there’s a vibe‚ it’s just instantaneous. You look into each other’s eyes and we snogged.

“It’s just kissing‚ that’s all we did. Nothing happened from there,” he said.

Maboe further said he was ready for a relationship with someone whom he could raise a family with.

“I think I’ve gotten to this stage of my life where I realise I’m ready for a proper relationship‚ one that can actually be long-lasting. My biggest excuse for the past couple of years has just been‚ I work too hard‚ and I find it unfair for me to be so dedicated to my work‚ but I can’t give the same sort of dedication to someone who loves me and who wants to be with me,” he added.

Now, the Expresso host and OUTsurance ad presenter has taken to the social media platform to address the embarrassing video:

I was unfaithful to my partner during a very important time of our lives – an act I regret to this day. We are currently undergoing an unfortunate and painful separation which is being resolved through legal proceedings. pic.twitter.com/jjOEqY8hti 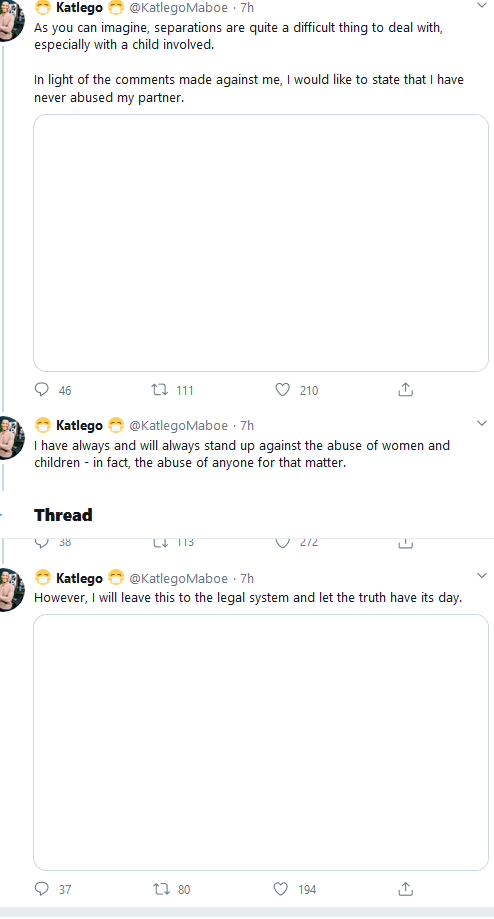 I have always and will always stand up against the abuse of women and children – in fact, the abuse of anyone for that matter.

I had chosen to deal with this matter privately to protect and safeguard our child. At the end of the day, our child is all that matters to me.