Home Celeb Gossip He enjoyed sex with me, his wife & Lady Zamar – Sjava's...

From multiple hits, making history at the BET awards, to being considered a talent and a success Sjava, whose real name is Jabulani Makhubo is making headlines not for his musical career, which brought him to stardom, but for his personal life.

Recently he had a fall with ex-girlfriend Lady Zamar who claimed the musician raped her, whilst they were dating… and his mother once shocked his fans when she disclosed that Sjava had a wife during the time he was in a relationship with Zamar.

This time He is locked in a child paternity wrangle and is said to have stopped paying child-maintenance, by a young woman who claims Sjava is the father of her child.

A 26-year-old woman, *Mandisa Mkutu has come out guns blazing exposing Sjava secret love child. She told Drum magazine that he is now denying responsibility, much to her displeasure as she is sure the son is his.

She even claimed that Sjava want to keep the child a secret, even from his own family. According to Mandisa, at some point he tried to buy her, into silence over the issue by sending someone from his record label with a bribe to so that she doesn't tell people about the child.

She claims Sjava’s bosses tried to buy her silence last year. Mandisa says she was paid a visit by a staff member from Ambitiouz Entertainment in December.

"They heard I was going to expose Jabulani because I was tired of his tricks. They told me he was going through a lot and that this would break him. They gave me R10 000 in cash and told me to keep quiet," she said, adding that she took the money to the police and wrote an affidavit.

When asked about the cash, the record company, Ambitiouz Entertainment could neither confirm nor deny the issue. Though the label's CEO Kgosi Mahumapelo, said they would not comment on personal issues which are in fact non-business related matters.

"I feel insulted by him thinking the child is not his," she said, adding that the child deserves to be taken care of by his father, even though she and Sjava are not living together.

Mandisa is a model who also runs a small business in East London, where she met him in 2017, when he came to perform at a festival.

Mandisa, who received her last child-maintenance payment in March, says it’s been an uphill battle to get Sjava (35) to take responsibility for their son.

“I am really tired. If the child was not his, why would he support me for almost a year?”

Contacted for comment, Sjava agreed to respond to our questions via text but despite the messages being blue-ticked, he has not replied.

According to Mandisa, Sjava hasn’t breathed a word about their baby to anyone, including his family.

“He needs to support his son. I don’t have to be with him, but the child deserves to be supported by his father.”

MANDISA, a model who also ran a small business, met the Ikhandlela singer in East London where he was booked to perform at a festival in 2017.

“He and I started talking. It was mostly small talk and laughs,” she recalls.

“I didn’t think anything of it until he invited me to the afterparty. With my job I meet a lot of celebrities. I wasn’t excited that Sjava was making a move on me. I wasn’t a groupie. He wasn’t really my type, but I joined the afterparty.”

The two spent the evening enjoying each other’s company, and when he left East London, they stayed in touch. “He was kind and caring. In our conversations, he always asked me to move to Joburg. I had thought about it before, but I wasn’t ready because my company was doing well back home,” she says.

At one point, she flew to Johannesburg for a weekend for work. “I told him I was in town and he came to pick me up on Sunday after his gigs and we went to Emtee’s house in Midrand.

As their friendship grew into something, he advised her to relocate to Johannesburg, but, she shot the idea down, saying her business was doing well back home and as such she was not prepared to relocate.

" We were sort of dating by then, but we hadn't made it official".

She then later moved in with a friend in Midrand close to the place where Sjava stayed with his friend. Since then they could see each other almost on a daily basis.

Soon she began toying with the idea of relocating and eventually did, he promised to take care of her until she finds a job. According to Mandisa, things changed when she got a job at a call center and relocated to Auckland Park.

"I suspect he was cheating because sometimes he would not take my calls or he would be online on WhatsApp and not respond to my texts. He became distant. I suspected there was someone," she said, adding that when she confronted him he denied it.

" That weekend I went to see him and stayed over a his place until sunday, Sjava and i always use condoms and that weekend i thought we did".

" I asked him where the condom was and he said he took it off. I sort off giggled and brushed it off and he joked about me getting pregnant, but i just let it go."

In October 2018 she noticed that she was pregnant and sent him a message to which he responded by saying okay. She, however, claimed he became even more distant and they did not speak for the rest of October, leaving her feeling used and she fell into depression.

She began feeling that it was better if she took her life and she felt hard on herself for falling pregnant.

She said sometime in December he was going to perform at the Mzansi Magic Homeground and he came to see her. He told her he had left people at his place so he booked a hotel for the two of them.

"That day I saw a message on his phone from a person named 'My Baby' I told him I knew he was dating and that I had accepted it," she said, adding that she only found out later that the person was Lady Zamar. so he was having sex with the 3 of us, me, his wife and Lady Zamar.

Mandisa said if she had known he was dating or married, she wouldn't have accepted a relationship with him because for her it would have been a toxic relationship.

" If i knew he was married or dating, I wouldn't have stayed in the relationship. I would have cut ties, It was toxic.

Sjava supported me at first though he did not seem thrilled to become father.

' When i told him I'm going home to East London for a visit, he asked for my bank account number and sent me R3000 to buy multivitamins and get medical check, From then he gave me money every month."

When she found a place in Auckland Park he even helped her paying rent. She said he would give her R5 000 every month for rent and necessities and Drum magazine was shown the proof of payment, believed to have been deposited by Sjava. 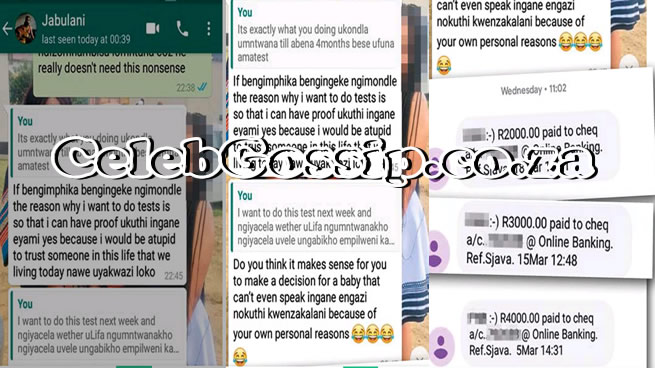 One of her neighbours confirmed seeing Sjava with Mandisa on a couple of times.

She said she gave birth on a Saturday and he came to see her that Sunday at Coronation Hospital in Sophiatown. Mandisa said he was happy and even named his son. She said he appeared to be going to be a good father and took the umbilical cord for traditional rituals.

To her shock, four months down the line he said he wanted DNA tests so that he could take the baby home for a traditional ceremony (Umsebenzi) meant to receive the baby into the family.

"But he said he wanted to be sure the child was his. All of a sudden," she said, adding that she accepted, but he never took the matter up and continued paying maintenance.

In March, he told her that he was broke because of the lockdown, she said he just changed completely does not visit the child anymore and just didn't care. She then applied for child maintenance at a local magistrate courts.

She could no longer afford the rent in Auckland and is currently struggling to fend for herself and her son, thanks to her family who help her here and there as she tries to find her feet again.

Her family welcomed her son and is helpful. Her cousin said they wouldn't let her suffer.

"No one is forcing him to be a father, but he can at least support the child and be an ATM dad," said the relative who did not want to be named.

*Name changed to protect her identity.