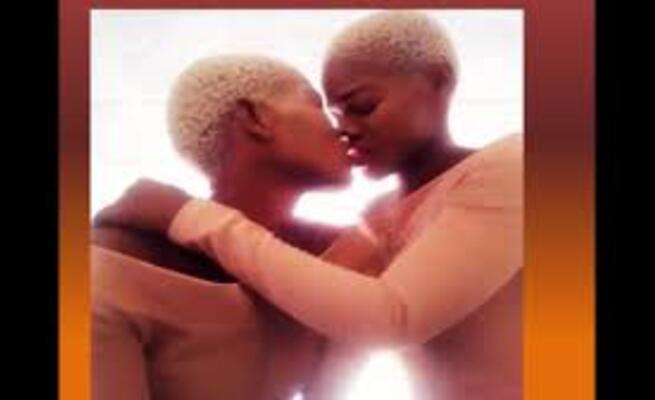 The Qwabe twins, Virginia and Viggy Qwabe are known for their strong unbreakable bond that naturally comes with being twins. There is not doubt that the Qwabe twins are in love with one another. The famous songbirds had our hair raising each time they took to the stage during the 2019 SA Idols singing competition.

Now the twins are trending on social media after they uploaded a video on Twitter sharing a sentimental and passionate moment in which they kissed. Twitter was soon divided on the extent of their bond and if it just bordered on being sisters. Some hinted that they might be involved in a taboo relationship. Everyone knows the Qwabe twins are in love..

Before the kiss, they can be seen staring at each other affectionately before the ‘passionate’ kiss. Users found that ‘cringe-worthy’ and some thought they were going to make out.

The twins were appreciating each other. The caption reads: “I can’t ask more from you, God. Am grateful for what I have.”

Black twitter soon descended on their timeline and questioned their sexuality and extent of their bond. A lot of comments bordered on outride rudeness and inappropriate.

The Qwabe twins are Xhosa and the practice of kissing on the lips of your siblings is practised without prejudice.

Watch the video and comments below

Another commenter reminded people how it has always been like this since the Qwabe and twins became famous.

“Y’all can say all you want but @qwabe_twins_ have always been this way since @IdolsSA where they’d do it unashamedly. They are sisters, twins..They have deemed it OK and normal for them. Who are we to question how the express gratitude for each other.

It however has to be noted that the twins have always had a strong bond with each other and there is nothing more to the video.

I did not see anything wrong with the twins video. I’m just thinking a lot of y’all folks (mostly black) don’t hug and kiss their siblings apart from saying hi and goodbye hence they are reading too much into it#QwabeTwins